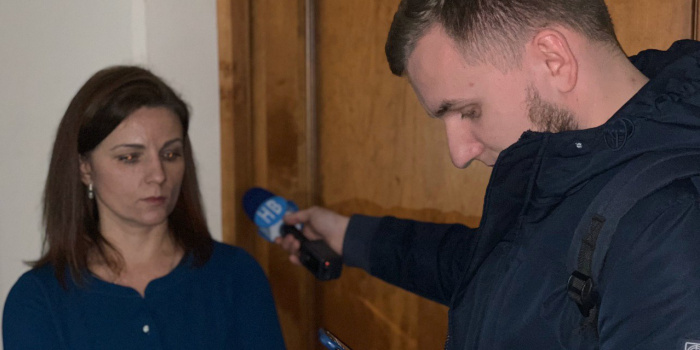 Several journalists in Mykolaiv appealed to the police, complaining over denial of access to a press conference with the head of the regional state administration Oleksander Stadnik, as the contributor to IMI in Mykolaiv region reported.

On February 21st, the head Mykolaiv regional state administration had the meeting with the journalists of regional, district and municipal printed press. The meeting, initiated by the Crisis Media Center, took the form of a "collective interview", in fact, it was the press conference, where the journalists got answers on socially important issues, such as road repair, decentralization, medical reform, etc.

Having learned about the meeting, several journalists from local online editions also wished to attend the press conference, in particular journalists for the editions “My Gorod” and “NikVesti”.

But, at the request of the head of the Regional State Administration Oleksander Stadnik, those journalists were driven out the premises and then, the door was locked.

Commenting on the situation, the acting Head of the Information and Public Relations Department, Olena Ivanenko, said that the format of the event included only journalists from printed press and not online editions.

The IMI lawyer Ali Safarov considered that denial of access to the government meeting with the press was an obstacle to their legitimate professional activity.

As Ali Safarov told, in compliance with the second part of the Article 25 of the Law of Ukraine "On Information", any journalist is entitled to freely visit the premises of the authorities, to attend public meetings they have and be personally admitted within a reasonable time by their officials and public servants, except the cases as it is defined by law.

At the same time, as the lawyer noted, the presence or absence of accreditation could not be the reason for denial of access for the journalist to the meetings. The part 1 of the Article 26th of the Law “On Information” provides that the failure to be accredited shall not be a ground for non-access for the journalist, media professional to public meetings conducted by a subject of power.

"Thus, non-admission of journalists to the government meeting is an obstruction of legitimate professional activity of the journalist and is indicative of a criminal offense, as it is stipulated by the Article 171 of the Criminal Code of Ukraine," Ali Safarov said.

The journalists of “Moy Gorod” and “NikVesti” editions lodged complaints to the police of the Mykolaiv region with the request to evaluate such actions and to take an appropriate response to activity of officials of the Mykolaiv Regional State Administration.