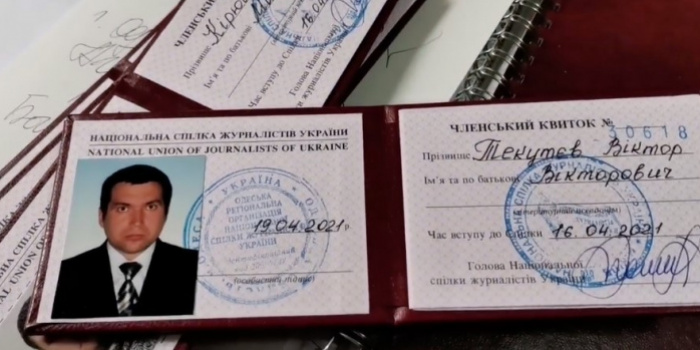 The Odesa regional organization of the National Union of Journalists of Ukraine (NSJU) has canceled union members' certificates to nine outsider figures. This decision was made by the board of the organization on April 19, according to the NSJU website.

It is noted that the negative reports about these people that had been made public was the reason for additional verification at the initiative of the central office of the NSJU.

As explained by the head of the Odessa regional branch of the union Yuriy Rabotin, in March they received applications from nine people asking to join the union (the domicile registration of all of them was the Kherson region). According to the explanation, the applicants justified their appeal to the Odessa organization by lockdown measures in the territory of the Kherson region, due to which meetings on admission to the NSJU were allegedly impossible. The Odessa regional organization considered the applications and documents of the candidates and decided the issue positively for the candidates.

The National Union of Journalists welcomed the decision of the regional organization and assured that its activities "will always be based on the principles of transparency and openness to constructive criticism."

"At the same time, we emphasize that in the activities of regional (local) organizations during the admission of new members of the union it is important to carefully view all the circumstances related to the candidates and adhere to the principles of collective discussion and decision-making," the statement said.

The head of the Kherson regional organization of the National Union of Journalists of Ukraine, Valery Dolyna, said the IMI representative that he was completely surprised by the announcement of the issuance of certificates to Kherson residents in Odessa.

“Yesterday a colleague from Odessa called me. He told about that incident, but I was unable to realize why these people went to Odessa. Moreover, I asked for the names of the people who received the certificates, and realized that I did not know who they were. So we agreed that all documents from Odessa on these people will be handed over to us and we will understand what happened, ”he said.

As IMI reported, The Odessa regional branch of the National Union of Journalists of Ukraine (NSJU) has issued cards of the affiliated members of the union to the outside figures, whose activity could be hardly named journalism.

The video of the signed documents lying on the table of the head of Odessa branch of the National Union of Journalists of Ukraine Yuriy Ryabotin was made public on the Facebook page of “Khersonsky Visnyk new”.

The video shows journalists' certificates issued on behalf of the NSJU to some Kherson businessmen, politicians and even a participant in the "Russian Spring", as the representative of IMI in the Kherson region said, after having analyzed the data mentioned in the certificates.