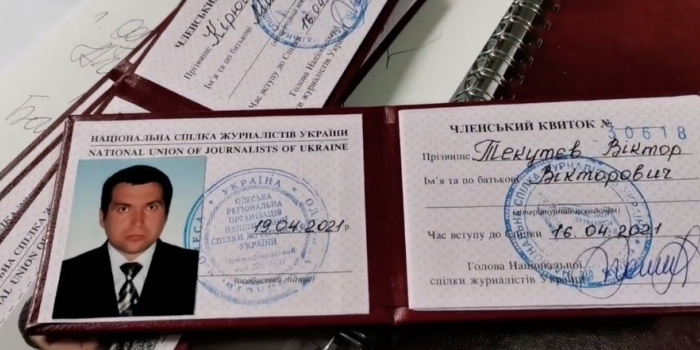 The Odessa regional branch of the National Union of Journalists of Ukraine (NSJU) has issued cards of the affiliated members of the union to the outside figures, whose activity could be hardly named journalism.

The video of the signed documents lying on the table of the head of Odessa branch of the National Union of Journalists of Ukraine Yuriy Ryabotin was made public on the Facebook page of “Khersonsky Visnyk new”.

The video shows journalists' certificates issued on behalf of the NSJU to some Kherson businessmen, politicians and even a participant in the "Russian Spring", as the representative of IMI in the Kherson region said, after having analyzed the data mentioned in the certificates.

Among the above-mentioned press identity certificates were those ones issued to:

-Dmytro Kiryushchenko, a lawyer who had been detained in 2019 under Article 255 of the Criminal Code (cache containing the last name );

-Viktor Tekutyev, an ex-policeman, an odious pro-Russian activist , a participant in the "Russian Spring";

-Sergey Dmitriev, businessman, member of the executive committee of the Kherson city council.

Commenting on the fact of issuing press identity certificates to outsiders on Facebook, the chairman of the National Union of Journalists of Ukraine Serhiy Tomilenko said that the issue would be studied.

“Colleagues, joining the NSJU goes through regional organizations. I would like to inform you that due to this discussion and debates, the circumstances of admittance and issuance of the certificates by Mr. Tekutyev will be immediately studied. We will be grateful for providing facts that will help in making decisions, "he said in comments to the discussion .

It will be recalled that according to the information on the NSJU website , its members “may be citizens of Ukraine and other countries who have reached age of 18 years and recognize the NSJU Charter, Code of Professional Journalism Ethics, who are in professional journalism for at least one year, who work full-time or part-time in newspapers and magazines, television and radio broadcasting, online publications and news agencies, publishing houses and press services (including photojournalists and media designers) or are freelance journalists; teachers of educational institutions and institutions that train journalists; creative professionals within the journalistic organizations, whose achievements deserve attention ”.

The status of a journalist allows unimpeded access to government premises and their activities, gathering information in areas where quarantine restrictions have been imposed, attending election commission meetings, obtaining the right to hold traumatic weapons, and providing other additional rights compared to ordinary citizens.