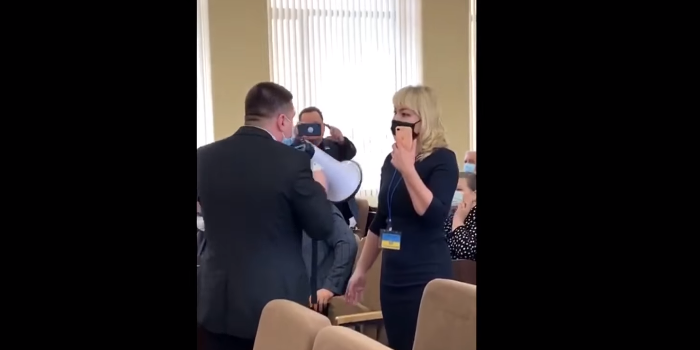 Screenshot from the vido of Radio Izyum

On August 31, Kharkiv Region police served the Izyum city councilor with notice of charges for obstructing journalistic activity of the director of Radio Izium Olha Hovtva, as it is reported on thewebsite of the National Police in Kharkiv region.

According to the investigation, on February 24, the director of the radio company was to cover the activities of the Izium City Council, on the editorial board assignment.

"At 3:14 p.m., while in the session hall of the Izyum City Council, the deputy approached the journalist and snatched a mobile phone from her hands, with which she recorded the events of the session, and then threw it on the table," the statement said.

The director of the radio company filed complaint with the Izyum District Police Department on March 4.

The criminal proceedings were initiated for obstruction of lawful professional activity of journalists (p. 1 Art. 171 of the Criminal code).

As IMI reported, on March 2, the editorial staff of Radio Izyum (Kharkiv region) accused the deputies of the Izyum City Council of obstructing their journalistic activities. In particular, during the City Council session, Denis Steiman, a city councilor from the Opposition Platform For Life, obstructed, threatened and insulted Radio Izium director Olga Govtva.