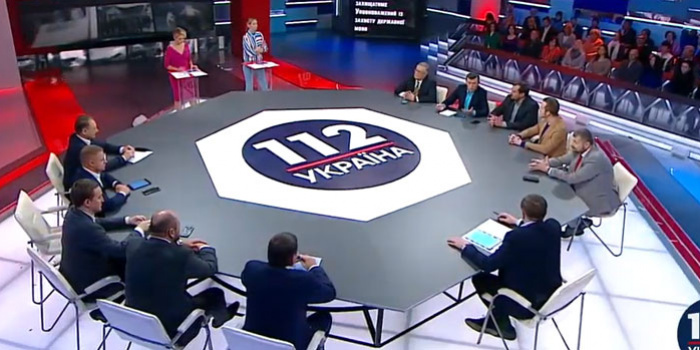 In fact, September 26 is the last day of its license validity, when they have to cease digital broadcasting.

"We will promptly notify the telecommunications operator (" Zeonbud ") of every decision taken," the National Council’s member Serhiy Kostinsky said. The National Council is to undertake tendering procedure for the vacant frequencies.

During the period of activity of these companies, the National Council applied to each of them eight sanctions, which are valid and not canceled by the court:

For more than a year, the National Council did not consider extending of the digital licenses of “112 Ukraina” companies, because of a court injunction. On September 16, the court overturned the ban.

The systematic violations were due to violation of their programming concepts, which supposed regional entertainment and information broadcasting, but in fact, it was broadcasting of the national information channel "112 Ukraina".

The members of the National Council stressed that it is not a matter of revoking the license of “112 Ukraina”: it has a satellite broadcast license and it will go on broadcasting. It is question of five regional companies that were obliged to broadcast as regional channels, and not to retransmit a nationwide channel (legally speaking, it was the "joint product", not a retransmitting).

In its turn, the “112 Ukraina”’s official Vasily Smetana said that all these years, the National Council had unlawfully refused the companies to re-issue their program concepts: each company received 34 refusals, and the 35th enquiry has not been yet considered. He considers this a violation of the right to free speech. He was supported by MP Nestor Shufrych (Opposition Platform - For Life), chairman of the Parliamentary Committee on Freedom of Speech. The First Deputy Chairman of the National Council Olga Gerasimyuk argued this issue was not related to freedom of speech, but was about systematic violations of the law and license conditions.

As IMI, on September 16, 2019, the Sixth Administrative Court of Appeal dismissed appeal from the group of regional companies broadcasting with logo "112 Ukraina" as to refusal by the National Television and Radio Broadcasting Council to extend their licenses.

In September 2019, the Kyiv District Administrative Court received lawsuits asking plaintiffs to ban three members of the National Television and Radio Broadcasting Council from participating in a regulator's meeting discussing issues about 112 TV companies broadcasting under the logo of “112 Ukraina ".

On August 1, 2019, the National Television and Radio Broadcasting Council announced unscheduled audits to five digital regional companies which broadcast under logo "112 Ukraina". The inspection was assigned to LLC “New TV format”, LLC “Ariadna TV”, LLC “Partner TV”, LLC “TV Vybir” and LLC “Leader TV” due to the change of the broadcast format from the entertainment and information one involving film screening to the information and due to change of the licensees' logos.