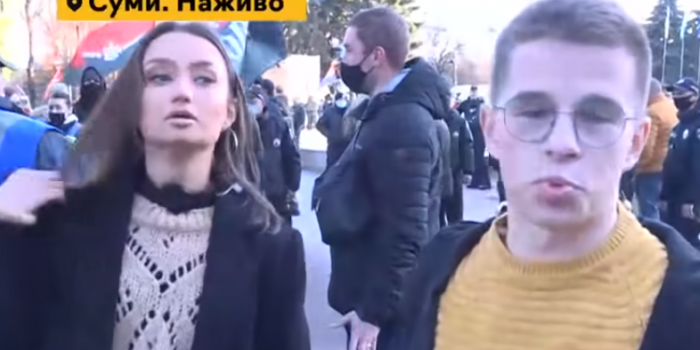 Screenshot from the video of Nash TV

Activists of Pravy Sektor clashed with journalists for one of the TV channels in Sumy on October 30. This was reported on the website of the National Police of Sumy region.

A police establishe the circumstances of the incident and will provide a legal assessment to all parties to the conflict in the near future.

The Nash TV channel reported about the attack on its journalists in Sumy. According to the TV channel, these were the representatives of the "Pravy Sektor” (Right Sector) who made assault.

According to the channel's journalist Maksym Herasymenko, the attackers smashed the equipment and hit him in the face.

“I received a direct blow to my journalistic face, because I was defending my cameraman. We tried to build a dialogue, in a few minutes a large number of young guys came to the central square. There were not enough police, but they tried, they tried to do everything to the maximum. There were about 100-150 hardcore persons, maybe I exaggerated a bit. The “dialogue police” is unable to do anything, ” he said.

According to Suspilne, representatives of the "Pravy Sektor" gathered on October 30 for a rally near the Main Directorate of the National Police in Sumy. They set fire to tires and lit red torches, accusing police of inaction, including what they believe led to murder of an activist Oleksander Ivanina on October 27.

Protesters asked about the progress of the investigation into the murder of Aleksander Ivanina.