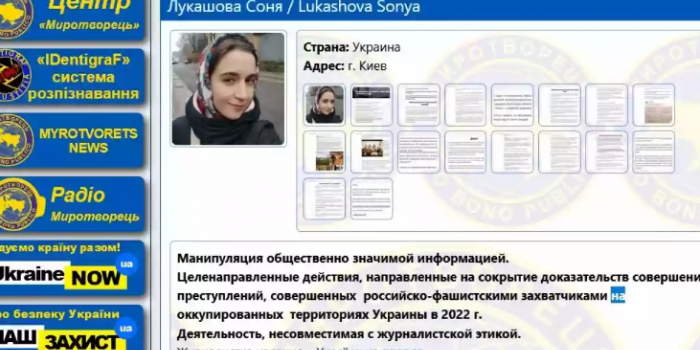 She is accused of alleged "deliberate actions detrimental to the national security of Ukraine," of "manipulating socially significant information," and of "violating journalistic ethics."

“Manipulation of socially significant information. Deliberate actions aimed at concealing the evidence of crimes committed by russian fascist invaders in the occupied territories of Ukraine in 2022. Activities incompatible with journalistic ethics."

This became known the day Sonia Lukashova's article “From Facebook to interrogations. Why did the Commissioner lose her job" was published on UP. It mentions some facts about ex-Commissioner Lyudmila Denisova with reference to anonymous sources. The article caused a resonance among readers, the discussion on the published information is ongoing.

It was also stated on the website that Sonya Lukashova allegedly "tried to obtain the text of Sternenko's suspicion notice through deception" and also "wrote about war veteran 'Puma's' links to the Sheremet case." Earlier, on November 7, 2019, UP published an article by Sonya Lukashova, citing anonymous sources about the alleged involvement of Donbas war veterans Inna ("Puma") and Vladislav Hryshchenko in the murder of journalist Pavlo Sheremet.

Earlier, such well-known personalities as former US Secretary of State Henry Kissinger and former First Channel editor-in-chief Marina Ovsyannikova, pro-russian propagandists and collaborators, have been added to the Myrotvorets database.

Detector Media wrote to Sonya Lukashova and hopes to get a comment from her.