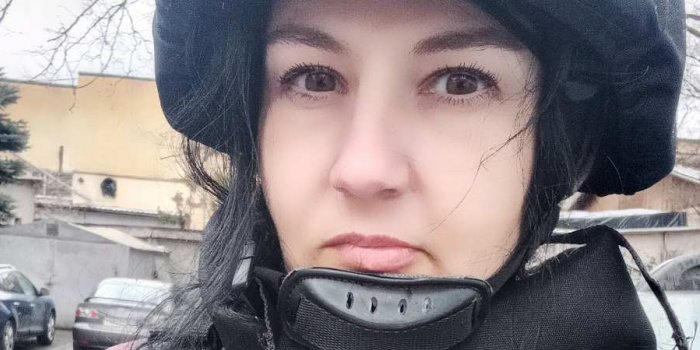 Mykolayiv "NIS-TV" channel journalist Natalya Prykhodko in her interview with IMI spoke about the specifics of the local media persons' work during wartime. According to her, they have become kinder and are helping each other.

Natalya has been working to cover the war since the first days of russia's full-scale invasion of Ukraine. She told the story of how one day during the filming, an explosion was heard 700 meters away from the set.

“We went to one of the districts of Mykolayiv to film a combat medics wedding, they both work in one of crews which is deployed in one of the city's districts. We were filming this uplifting story, we filmed it. There had been a shelling attack nearby the day before, and we went to film the consequences in the same trip. And that was when a shell hit a factory... We fell, lay down for a bit... There was a military chaplain with us as well, and we looked at this whole thing... it was somewhere around 700 meters away… It was in April," she said.

Also Natalya spoke about what had changed in the work of the Mykolayiv media persons with the beginning of the full-scale invasion.

"Of course it has changed. Because everything is nearby. And I can go by myself and film the shelling on the next street, take interviews from the witnesses. Before this, we would only hear such things from relatives or parents of the victims, from the direct participants who told us the stories," the journalist says.

Also, according to Natalya, journalists in Mykolayiv have become kinder and are helping each other.

"I think journalists have become kinder. Whenever we meet on the set, and we usually meet at shelling sites, we are all so happy to see one another. Sincerely. We all greet one another, hug, exchange contacts and some news. It seems to me that journalists have come to value and help one another more. This is my opinion," she said.

NIS-TV, for which Natalyya works, has united with the municipal TV channel MART and is working together with them to create a daily news program, E-News.

“We communicate and share the topics with one another. For example, I will film the humanitarian or volunteer stuff today, and the other editorial team will film, say, shellings. Tomorrow we will switch to make the overall episode more or less rich. Like that," Natalya said.

In addition, NIS-TV itself began to work more on Facebook and YouTube. "If before, we used to film a story, edit it, and wait for the news release that comes out at a certain time in the evening, now, for example, I recorded the shelling in the morning, as the cameraman was filming – I recorded it on my phone, edited a 40-second video on it, a kind of a Facebook format, and by 11 o'clock we have already posted it on social media and announced that we were preparing this story," she noted.

As IMI reported, Natalya Prykhodko has been awarded the Honorary Diploma of the Cabinet of Ministers of Ukraine for high professionalism, defending democratic ideals and freedom of speech, and protecting the information space during the russian federation's armed aggression, as well as on the occasion of the Journalist's Day in Ukraine.