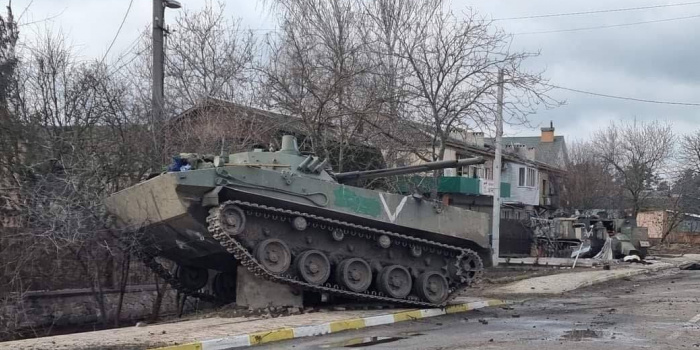 This was announced by MP Mykola Kniazhytskyi , MP Yaroslav Zheleznyak , the website of the Servant of the People party.

The explanatory note states that on February 24, 2022, the Russian Federation launched an open war against Ukraine, and the leaders of the terrorist state are trying to make the letters "Z" and "V" symbols of aggression against Ukraine. "By recognizing at the legal level the neo-Nazi nature of both the entire political regime in modern Russia and the symbols used to justify and support war, Ukraine will set an example for other countries to join Putin's Russia as a normal neo-Nazi regime whgich doesn’;t differ by aything from the fascist and Nazi regimes of the mid-twentieth century, ”the authors write.

Thus, the bill prohibits the use of the press to propagate the Russian neo-Nazi totalitarian regime and aggression against Ukraine. The same goes for TV and radio. It is also forbidden to register the print media, the name of which contains symbols of the Russian invasion of Ukraine.

The Law on Political Parties prohibits the establishment and operation of parties aimed at promoting the Russian regime, aggression and symbols used in the war against Ukraine.

The document also prohibits legal entities from using such symbols in the title.

A new term is used in the Anti-Terrorism Law:

"A terrorist state is a state that officially and openly, with the use of its own armed forces and (or) other state military formations, commits terrorist acts, acts of international terrorism."

And terrorist activities include "propaganda of the Russian neo-Nazi totalitarian regime, an act of aggression against Ukraine by the Russian Federation as a terrorist state."

It should be noted that the text of the bill may be changed before it is adopted as a whole.

As IMI reported, on March 24, the Lithuanian Parliament considered two draft amendments to the Code of Administrative Offenses aimed at equating the St. George ribbon and the Z and V symbols with Nazi and communist symbols.

The Minister for Foreign Affairs of Ukraine Dmytro Kuleba called on all states to criminalize the use of "Z" as a way to publicly support Russia's war of aggression.