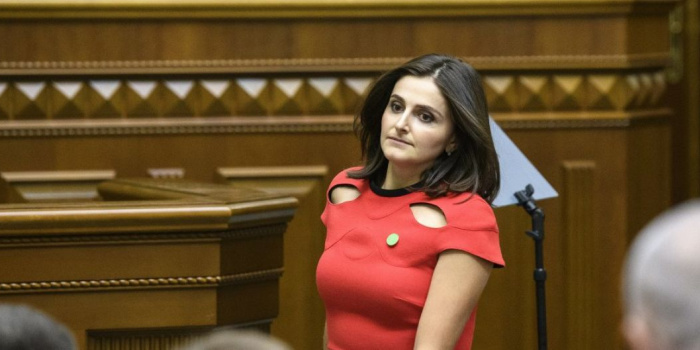 The MP from the Servant of People's Party Olga Vasylevska-Smaglyuk, who said that "freedom of speech should be muted," said that her words had been distorted. She wrote it on her Facebook page, as Hromadske Radio reported.

"Follow the eyebrows of Iryna Romaliysky (presenter of "Current Time”, which broadcasted the MP’s comment - Ed.) –as Vasylevska-Smagliy wrote. – At first, she asked about Marichka Zvirobiy, then she did about a person who tore to pieces the portrait of Poroshenko then she did about Oleksader Dubinsky and his words. Then she gets my answer that we have too much of freedom of speech and it is time to start thinking before speaking to those who allow it. "

According to the MP, her last phrase was cut out of context.

"Clever girl! Good job, well done," she wrote. Me, working in journalism during 15 years, I proved with my investigations, what government was not OK for Ukraine: corruptive, cynical one and so on. But it was found out it is sufficient to threaten the president with physical violence and it will become normal, freedom of speech. What we got!  Take care of your eyebrows, Iryna. You still have to manage and control them. "

"We have such a strong freedom of speech in our country that it would be time to muffle it a little bit, out of respect for the Presidency, one should think before speaking," Smaglyuk had said.

She added that "if it happened somewhere in the Crimea today or in Russia, then this person would not expected to get under some sanctions ruled court and search. That person would simply be imprisoned. Without trial and investigation."

Subsequently, the MP wrote another postin social network reiterating that her words had been taken out of context, and she noted that she "drew attention to the expediency of self-censorship for people who have a penchant to think about murder and destruction."

“I consider the President's life threatening as his life thereatening. Instead, my interlocutor, Akhtem Chygoz, found it was damaging honor and dignity. And if anyone can take advantage of these statements and put them into practice? And the responsibility will be placed on the one who voiced threats? Will this also be damaging to one’s honor and dignity?

Soon it may become the norm to "beat up the Yids" or calls to persecute sex minorities, etc. Then both the gas and stoves and murders will repeat mistakes that preceded the Holocaust tragedy. And I'm afraid of that in my genes.

Thus, I do condemn the statements calling to do it and I draw attention to the expediency of self-censorship for people who have a penchant for murder and destruction. Hence the last phrase about the restriction of that freedom of speech. And once again I emphasize: there is a big difference between freedom of speech and threats of physical force against the President, ” the MP wrote.

As IMI reported, the former journalist and actually MP from the party "Servant of the People" Olga Vasylevska-Smaglyuk said that in Ukraine "it is time to stifle the freedom of speech." She said this on air of “Current Time”, commenting on searches held at the place of residence of  volunteer and blogger Marusya Zvirobiy, suspected of threats to the President of Ukraine.