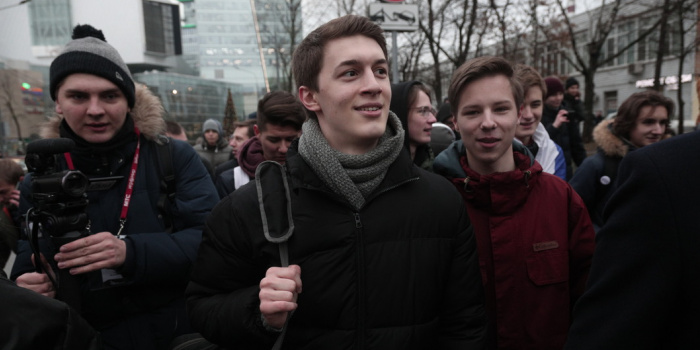 The Kuntsevsky district court in Moscow sentenced to three years of suspended sentence to  Yegor Zhukov, student of the Higher School of Economics, having found him guilty of calls for extremism in his videos on YouTube, as "Novaya Gazeta"  reported.

Yegor Zhukov was ruled ineligible to engage in activities related to website administration for two years.

Linguistic expertise has found calls for extremism in his YouTube videos. He pleaded not guilty. The judge noted that the scripts for the video and the videos Zhukov himself prepared on his computer, he confirmed himself.

"I feel great. I wanted to say three things. First, I hope you have already learned not to see as a victory condemning innocent people. I'm glad I'm free. But, nevertheless, it is still an absolutely unjust decision… ”, - Zhukov commented.

The verdict also said that, according to the conclusion of FSB expert Alexander Korshikov, Zhukov claimed that he opposed the election. In addition, according to the court, the specificity of his university education enabled Zhukov to be aware of the prospects  and consequences of his actions.

The meeting was attended by Zhukov's parents, rapper Oxymiron, Vice-Rector of the Higher School of Economics Valery Kasamar and editor-in-chief of “Novaya Gazeta” Dmitry Muratov.

The prosecutor demanded four years of a general regime colony for Zhukov. The prosecution decided his guilt was fully proven.

Yegor Zhukov was detained on August 2, charging him with involvement in “mass riots” (Article 212 of the Criminal Code) at an uncoordinated rally on July 27. In September, the Investigative Committee of the Russian Federation stopped prosecuting Zhukov for "mass riots", opening a case on calls for extremism.

According to the investigation, from October to December 2017, Yegor Zhukov, "feeling a sense of political hatred and animosity towards the constitutional system in the Russian Federation, the system of state power and its representatives", aired four videos and posted them on his YouTube channel "Blog Zhukov", as if to "draw people to their extremist activities."

Zhukov himself said he created the channel in 2017 when he graduated from freshman year because he wanted to share his knowledge. He stressed that he did not hate any Russian politician, though he considered them "his political opponents," he said .