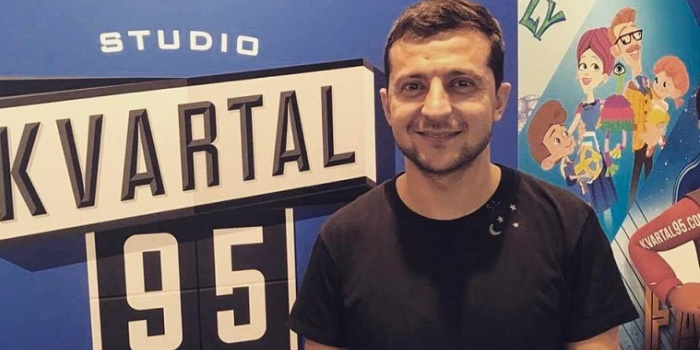 During the first year of Volodymyr Zelensky's presidency, more than 30 "Quarter 95”-persons and their acquaintances found themselves to take public positions, as the Committee of Voters of Ukraine (CVU) reported.

Over the course of this period, more than 30 are people who previously had been working with the structures of "Studio Quarter 95", its subsidiaries, or have been providing services to the company, cooperating with Zelensky on a professional basis, have been acquaintances, friends, relatives of Zelensky or his entourage. Of these, 12 worked directly in the "Studio Quarter 95".

According to the CVU, these individuals were appointed to the positions of assistants, deputies, heads of the President's Office, took positions in the security bodies of Ukraine, central executive bodies, became members of supervisory boards, committees, were elected MPs of Ukraine.

At the same time, as the CVU noted, the vast majority of them had not previously held similar positions. Only a few had relevant work experience, but it was during Zelensky's tenure that their careers have been significantly boosted.

The Committee of Voters recalled that, as a presidential candidate, Zelensky promised to appoint professionals to public office, not acquaintances. The candidate's election program said that "politicians associated with old images, nepotism, business projects were not able to change Ukraine," but often the actual actions of the President did not correspond to what was written.

The "Studio Quarter 95" has become a source of manpower for the new authorities. If one took into account appointment not only of people who worked directly in the structures of the 95th Quarter, but also their acquaintances, friends, relatives, so they number at least three dozen persons who found themselves at influential government positions in the first year under V. Zelensky's presidency. The real figures may be even higher. It should be understood that most of these people had not been involved in politics before and they simply would not take their current positions, if it weren’t V. Zelensky. Moreover, V. Zelensky's old friends and business partners have got not only positions in the President's Office, but also positions in the security agencies of Ukraine, which directly raises the question of their professional suitability to perform the tasks, " the CVU Chairman Oleksiy Koshel said.

The Committee of Voters of Ukraine provides a list of persons who took public positions:

Work in the Office of the President:

Yuriy Kostyuk (screenwriter and creative producer of the TV series "Servant of the People") - Deputy Head of the President's Office;

Iryna Pobedonostseva (according to media reports, she worked as the development director of “Studio Kvartal 95”) is the head of the information policy department of the President's Office.

Ivan Bakanov (lawyer and head of Kvartal 95 Studio) - Head of the Security Service of Ukraine (SBU);

Serhiy Syvokho (creative producer of "Studio Kvartal 95") - ex-adviser of the Secretary of the National Security and Defense Council of Ukraine;

Vladyslav Bukharev (the media say V. Bukharev is husband of a screenwriter of "Studio Quarter 95" and an acquaintance of V. Zelensky) - adviser to the Minister of Internal Affairs, former head of the Foreign Intelligence Service of Ukraine and former first deputy head of the SBU;

Alexander Pashkov (according to media reports, is the husband of an accountant at Studio “Quarter 95”) is the director of the Department of Strategic Intelligence of the Ministry of Defense.

Work in the central executive bodies and state structures:

Maryna Kuderchuk (had experience working with “Studio Quarter 95” in Zaporizhia) - Head of the State Agency of Ukraine for Cinema;

Serhiy Borzov (according to the media, he is the husband of the MP I. Borzova, ex-director of the KVN team "National Team of Ukraine") - head of the State Administration;

Tetyana Rudenko (Head of the Press Service of “Studio Quarter 95”) - Member of the National Council on Television and Radio Broadcasting;

Yulia Metzger (according to media reports, maintains friendly relations with the actress of "Studio Quarter 95" Olena Kravets) - a member of the Supervisory Board of PrivatBank;

Iryna Kopayhora (according to media reports, is the daughter of a lecturer at the Kryvyi Rih University of Economics, where V. Zelensky studied) - State Commissioner of the Antimonopoly Committee of Ukraine;

Alexander Gogilashvili (acquaintance of V. Zelensky; according to media reports, has ties to the "Studio Quarter 95") - Deputy Minister of Internal Affairs.

Mykola Tyshchenko (showman, godfather of the head of the Office of the President A. Yermak) – MP of Ukraine;

Ruslan Stefanchuk (an old acquaintance of V. Zelensky, a player of the KVN team "Three Fat Men") - First Deputy Chairman of the Verkhovna Rada of Ukraine;

Oleksandr Zavitnevych (according to media reports, his wife studied in the same class with V. Zelensky) - MP of Ukraine;

Valery Sterniychuk (headed the student "League of Laughter" in Volyn) - MP of Ukraine;

Igor Kryvosheev (showman, player of the League of Laughter and KVN) - MP of Ukraine;

Volodymyr Voronov (according to media reports, he had professional experience of cooperation with “Quarter-Concert”) - MP of Ukraine;

Roman Hryshchuk (head of the Mamakhohotala studio) – MP of Ukraine;

Iryna Borzova (according to the media she is daughter of the producer of the "League of Laughter") - MP of Ukraine;

The list of CVU was compiled on the basis of analysis of freely available information, publications of public authorities (data of the Central Election Commission, the President's Office, the website of the Verkhovna Rada of Ukraine), as well as media materials.