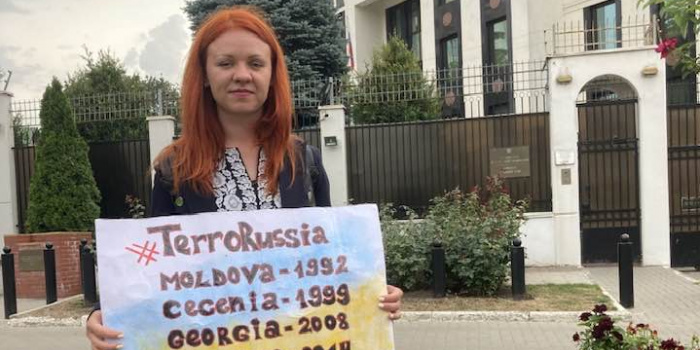 Moldovan police fined the man who had attacked Ukrainian journalist Marianna Prysyazhnyuk near the Russian Embassy in early October.

The journalist wrote about this on her Facebook page.

In her comment to an IMI representative, the journalist explained that according to the law, the fine for light hooliganism (which is how the police qualified the man's actions) ranges from 6 to 30 tariff units.

"According to the hryvnia to lei exchange rate, it is somewhere around UAH 600 at least," Marianna Prysiazhniuk said.

As IMI reported, in early October, Ukrainian "Glavkom" journalist Marianna Prysyazhnyuk reported being attacked near the Russian embassy in Moldova.

According to her, on October 2, there was a rally taking place near the consular dormitory where Russian diplomats live. It had been officially authorized and was supposed to last until 10 p.m. Activists had listed all the actions they were going to take.

"A man came up and said: 'I suggest you not to do this, because today is Saturday.' The attitude was as follows: if I speak to you in a normal tone, then you are obligated to fulfill my request. This is how the question was posed, the same way propaganda media does when they give you an ultimatum, this is how this man came up to me. In the end, the conversation developed in such a way that he said that Zelensky had provoked the war, that we would not achieve anything. I had my phone knocked out three times. That is, I took a video of this man actually knocking out the phone forcefully. Well, by knocked out I mean... I was holding the phone in front of my face. He actually wanted to hit me, but hit the phone instead, and the phone fell out," Marianna Prysyazhnyuk said.

She called the police. The carabinieri tried to explain to the man that the action was legal.

In the end, the journalist went to the police station together with the carabinieri; there, she filed a statement about the attack.