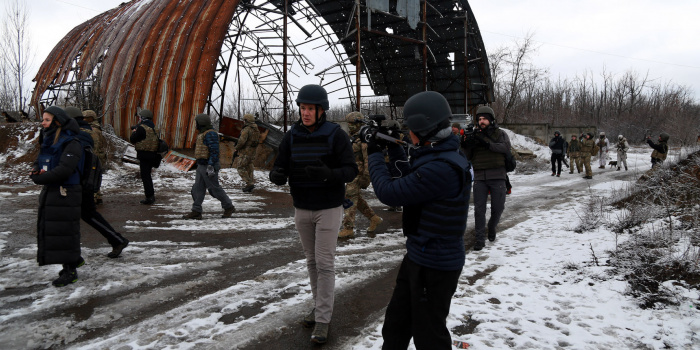 Foreign journalists have to rely on facts, as they cover the Russian-Ukrainian armed conflict, as the Minister of Culture Oleksander Tkachenko and Foreign Minister Dmytro Kuleba called on. They said it in a joint statement of the heads of the Ministry of Culture and Information Policy and Ministry of Foreing Affaitrs.

“The war in Donetsk and Luhansk regions is an international armed conflict that began with the occupation of the Autonomous Republic of Crimea and the city of Sevastopol by the Russian Federation. This stance is held not only by Ukraine, but also by the international community. In numerous statements, the Group of Seven, the EU and NATO leadership, and individual Euro-Atlantic countries emphasize that Russia is a party to the conflict, not a mediator, ” the statement said.

The Ministers remind that the Tripartite Contact Group, which is working on the settlement of the armed conflict, consists of three parties: Ukraine, which is defending itself; Russia, which stood on the offensive; the OSCE as a mediator between them. The Normandy format includes Ukraine, Russia and France with Germany as mediators.

"Thus, the Russian occupation administrations in Donetsk and Luhansk have no subject matter either in the negotiation process or in decision-making. We ask Ukrainian and foreign journalists not to create pseudo-subjectivity in the information space for those who do not have this subjectivity in the real world. The temporarily occupied territories of Donetsk and Luhansk regions are under the full control of the occupying state, the Russian Federation, ”the statement reads.

The ministers also urge the media not to succumb to Russian propaganda and not to influence its readers and viewers.

In addition, the ministers stressed that a journalist from any country has the right to visit the temporarily occupied territories through Ukrainian checkpoints along the line of demarcation. "Any other way of visiting the temporarily occupied territories, apart from the procedure established by Ukrainian law, is a violation and involves the application of sanctions," Kuleba and Tkachenko said.

“Recently, more and more publications or interviews with the so-called leaders of the so-called republic, recognized by the Ukrainian State as a terrorist group, appear in the foreign media. The interviews were recorded in the occupied Donetsk. The most recent case happened with Reuters, so I decided to respondю (…) the journalists who, in «keeping with» the standards of providing information from all sides, legitimize terrorism. At the same time, they provide criminals with the platform to articulate the ideas of the Kremlin".

As IMI reported, on February 8, the Media Movement declares that foreign journalists were facing regular problems to be accredited in Joint Forces Operation zone.