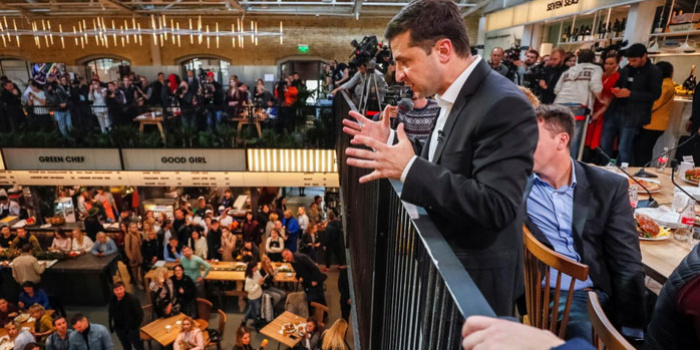 Several mass media and civic organizations called on the President to extend the deadline for drafting a misinformation bill. Respective statement was issued by the media movement “Media for conscious choice” and signed by a number of mass media and NGOs on December 19.

“Detektor Media” provided the full text of the statement:

"Media and civic organizations are concerned about lack of any grounded public debate on eventual criminal liability for misinformation. Such rules are supposed to be established by a bill being drafted by the Ministry of Culture, Youth and Sports to implement Presidential Decree # 837/2019. until December 31, 2019.

It should be reminded that the decree signed by the head of state No. 837/2019 “On immediate measures aiming to put in practice reforms and to consoldate statehood” of November 8, 2019, the Cabinet of Ministers was commissioned to work out and to submit to the Verkhovna Rada a bill that had to contain some “provisions on requirements and standards of news, mechanisms to prevent the dissemination of an inaccurate, distorted information ... and to strengthen liability for violations of information law. " The deadline for the assignment is December 31, 2019.

That is why any proposals that regulate freedom of speech and responsibility for misinformation cannot be prepared in a hurry, behind closed doors and without proper public discussions, involving professional Ukrainian and foreign experts.

Since, the drafting and registration deadline set by the Presidential Decree has practically expired and it is no longer possible to properly discuss the Ministry's proposals, we urge the President to extend the deadline for fulfilling this task and to oblige the Government to carry out appropriate discussions with the involvement of Ukrainian and foreign experts before registering the bill. "

"Beyond the News" information campaign.

As IMI reported, on November 8, the President Zelensky has chaged the government to develop the news standards in the fight against fake reports. The Cabinet of Ministers was instructed to draft a bill to regulate activities of the media and table it in parliament for consideration. This is stipulated in presidential decree No. 837/2019 on priority measures to conduct reforms and strengthen the state.

On November 20, the Ministry of Culture, Youth and Sports of Ukraine and the Verkhovna Rada Committee on Information Policy submitted for consideration of a limited number of online media the new media bill. The bill spells out the registration procedure for online media and social networks (Google, YouTube, Facebook) for a tax purposes. However, the both issues are under question. The question of equating bloggers with the media is to be discussed yet, and if so, from what number of subscribers, and not only the question of taxation, but also the issue of content will arise. The bill also stipulates fines and blocking of online resources by court order.

NGOs "Institute of Mass Information" and " Detector Media  have elaborated its suggestions on the most important spheres of the media bill - about audiovisual media services (media code).