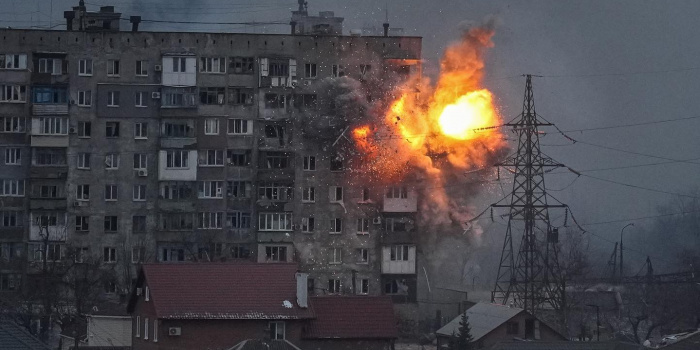 "Mariupolis-2" by Lithuanian director Mantas Kvedaravicius, who was killed by the Russian military, will premiere in Ukraine on November 11 at the Docudays UA festival; the film will be released in Ukrainian theaters on November 17.

"Arthouse Trafik" told this to Ukrinform.

As noted, the official Ukrainian teaser for the film documenting the March 2022 events in Mariupol has been released.

With the start of the full-scale invasion, the Lithuanian director returns to Mariupol, where he shot his first film six years ago. He wants to continue documenting the life of the city threatened by war. In the distance, the battles for "Azovstal" are ongoing, the Mariupol Drama Theater, marked as a shelter with children, can be seen. This film was created from the salvaged footage made by Kvedaravicius, who was captured and killed by the Russian military in late March 2022.

The content shot by the director was kept by his fiancée, Ukrainian Hanna Bilobrova, who was in Mariupol with him. She was able to take the video to Lithuania, where she edited the film together with Dunya Sychova, the editor of the first "Mariupolis".

The world premiere took place in the out-of-competition "Special Screening" section of the 75th Cannes Film Festival, where the film was awarded with the Special Jury Prize "Golden Eye".

The Ukrainian premiere of "Mariupolis-2" will take place on November 11: it will open the Docudays UA International Human Rights Documentary Film Festival.

"Mariupolis-2" will be released in Ukrainian theaters on November 17.

As IMI reported, the death of Mantas Kvedaravičius in Mariupol became known in early April. It was initially reported that a missile hit his car. It was later reported that he had been captured and killed by the Russian military.

The circumstances of Mantas Kvedaravičius' death in Mariupol were also reported by Verkhovna Rada Commissioner for Human Rights Lyudmila Denisova. According to the Commissioner, he had been taken prisoner by ruscists, who later shot him. "The occupiers threw the filmmaker's body out into the street. His wife, risking her life, took the body out of the blockaded city and brought it to Lithuania. The real cause of the filmmaker's death has not been announced before for the sake of her safety," the statement reads.

Project journalists discovered that Lithuanian director Mantas Kvedaravicius was killed in April when he tried to take three women, one of whom had a one-month-old baby, out of Mariupol. A militiaman from the so-called "DPR" Pavel Musienko (call sign Pashtet) may be involved in his murder.