Lithuania sends the Bayraktar they raised money for to Ukraine 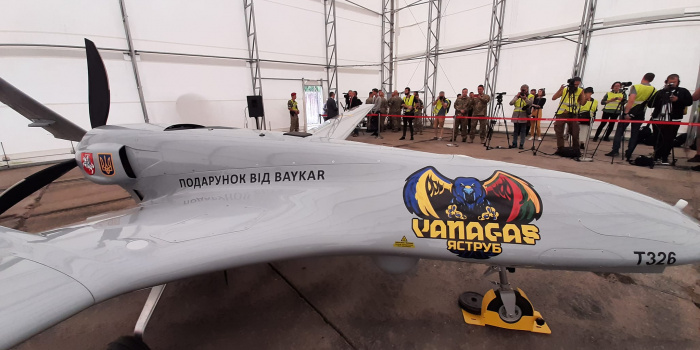 Lithuanian Ministry of Defense sent the Bayraktar TB2 UAV, for which the Lithuanians had raised funds but later the Turkish manufacturing company decided to hand over the drone for free, to Ukraine.

"The drone is leaving Lithuania, which took care of the logistics, and the Ministry of Defense took care of the procurement agreements and other legal formalities so that the drone with all the weapons could be delivered to Ukraine," Anušauskas said.

The initiator of the fund-raising campaign, Lithuanian journalist and TV presenter Andrius Tapinas, said that the funds collected for Bayraktar will be used to buy ammunition for it, as well as anti-drone guns and reconnaissance drones, and will also be sent to help a Ukrainian hospital.

"When the Bayraktar manufacturers said they were gifting it to us, the collected funds went to help Ukraine. We spent 1.5 million to buy bombs and missiles for this 'birdie.' We are currently purchasing anti-drone guns for another 1.5 million euros. Also, almost 500,000 euros will be provided to a hospital in Cherkasy, where Ukrainian military personnel are being treated. And we will also buy three Estonian reconnaissance drones, which are very advanced. This is a fantastic result for all of us," said Andrius Tapinas on Radio Liberty.

As reported by IMI, previously Lithuanian TV presenter, founder of Laisvės TV, and public figure Andrius Tapinas raised 5 million euros for a Bayraktar TB2 drone for the defenders of Ukraine in three days. Turkey decided to hand over the Bayraktar TB2 attack drone for which the Lithuanians had raised money for free.