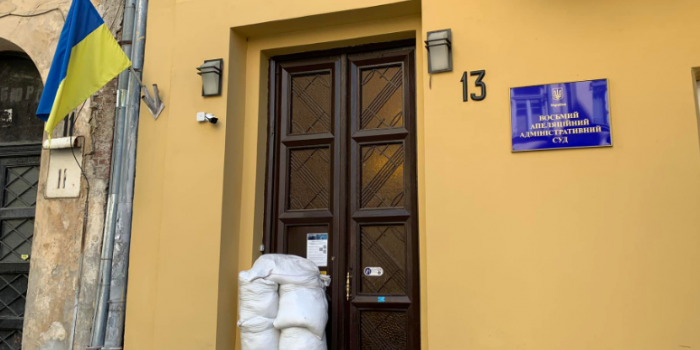 The Eighth Administrative Court of Appeal of Lviv did not allow journalists to attend a court hearing banning the activities of the "Opposition Platform – For Life" political party. This was reported to IMI representatives in Lviv region by the journalists who were denied entry.

This is not the first time such a situation has occurred in this court, according to media reports.

Editor of the publication "Nashi Hroshi. Lviv" Oleksandra Hubytska said that the court ignored them despite having promised to announce whether they would be allowed to attend the hearing.

"We arrived early before the court hearing. At the entrance checkpoint, we said that we came to attend this and that case. The guard said he would let them know that we had come and they would let us know whether we would be allowed in or not. After 30 minutes, it became clear that no one would let us in. What is most annoying is that no one came out to us and said anything," she said.

Later, an air raid alarm went off in Lviv. According to Hubytska, the journalists were not even allowed to go to the court's bomb shelter because, as the court's staff explained, it was too small.

"We went outside and waited. After the alarm was over, we went back to the hall, near the security post. But he didn't tell us anything new," added the editor of "Nashi Hroshi. Lviv" Oleksandra Hubytska.

"Chesno" Movement analyst Ihor Feshchenko said that out of the 10 meetings they tried to attend, they were only allowed into three.

"We try to attend each of the hearings on the banning of political parties, which take place in the Eighth Administrative Court of Appeal since June 8. Out of the 10 sessions that have taken place during this time, we were only admitted into 3. Today, giving no explanation, they did not allow us to enter the court. In the previous days, they explained that they could not let us in due to the quarantine. Today they probably do not want to give the quarantine explanation because yesterday, due to the presiding judge's principle-based stance, we were allowed to attend the hearing on the ban of the 'Socialist Party of Ukraine.' Today, they are not responding to our requests for someone to come out and explain what is happening."

IMI lawyer Roman Holovenko advises the journalists to contest this denial. "Many state facilities have become much more closed after the full-scale invasion, and this is not always justified, as those are not always in the frontline regions. If the journalists try to contest this entry denial, at least some arguments will be provided, and if those are unjustified, it will be possible to resist it through legal means," the lawyer said.

In addition to the "Nashi Hroshi. Lviv" editor and the "Chesno" Movement analyst, the access to the court hearing has also been denied to "Pershyy Zakhidnyy" channel journalists and a representative of the OPORA Civic Network.