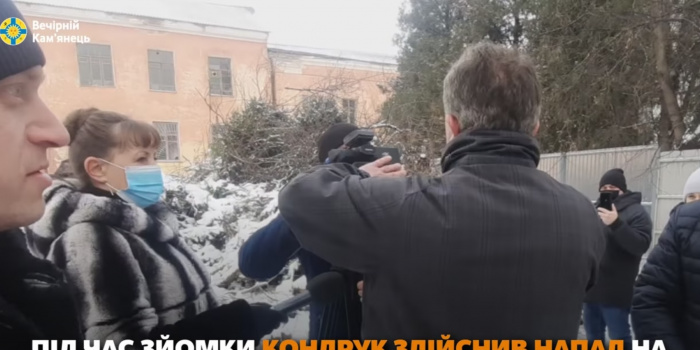 The Kamyanets-Podilsky TV and Radio Company is going to complain to police over the fact of obstruction to work of its TV crew that occurred on 21st of January. Alyona Bereza, a representative of IMI in the Khmelnytsky region, was informed about this by Inna Doroha, a journalist from the “KP” TV and Radio Company.

On January 21, the deputy of Kamyanets-Podilsky city council Volodymyr Kondruk hampered the jurnalists to film a story in the territory where an old balneary site was situated.

“This is not the first time that our TV crew film a story from this development site. After all, this site has stirred a conflict. This is the territory of the former balneary site. The developer claims that he disposes all the permits and operates within the current legislation, but some community leaders and some deputies oppose against it. This time, we were informed by third parties that some people were gathering in the territory of the former balneary. With this newsmaking event, we came to the construction site. The local deputy, assistants of the mayor, supporters of the “Svoboda” political force were at the scene. Police officers eye-witnessed the incident, as the cameramnan was hit, but they did not intervene. That's why we will apply to the district police department with a complaint, ” the journalist said.

The journalist added that their TV and radio company was systematically covering the sessions of the city council, and so all deputies knew them. She also said that before that she had already faced bullying on social networks after making public of a story.

As IMI reported, on January 22, 2020, a journalist from Kamyanets-Podilsky complained to the police over bullying.