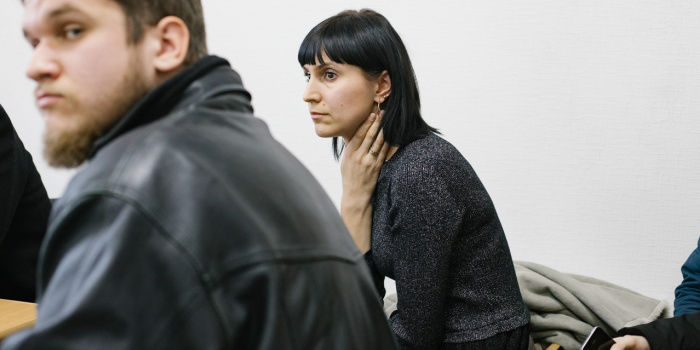 The lawyer for the head of the Vinnytsia branch of the Shariy’s party, Svitlana Magdenko, who is suing the editor in chief of the web-based edition “Vezha” Andriy Kachor, proposed to make a friendly settlement, as “Vezha” reported on its website.

According to the newspaper, on December 18, during the preparatory court session, the plaintiff refused to answer the lawyer's questions. And after the meeting, Magdenko's representative suggested to the journalist to conclude a friendly settlement agreement.

During the hearing, the parties filed a number of requests to the judge, but some of them were rejected.

The plaintiff claimed that stories published by “Vezha” on activities of the Vinnytsia branch of the Shariy’s party and about herself as his leader were translated in pressure on her by colleagues and acquaintances. In addition, it led to some deterioration of her health condition.

Also the court rejected Cachor's lawyer's request to produce the charter of Shariy’s party, since he was not available in the public domain. As to the lawyer Leonid Martsinkovsky, this charter could shed light on the authorities of Svitlana Magdenko as head of the Vinnytsia regional branch of the party.

For his part, Magdenko's lawyer pointed out that there was no political implication in the case and that it was squestion only of moral damage compensation. The representative of the plaintiff tried to offer the defendants a settlement agreement.

“This case has no political implication. The plaintiffs have no mercenary motive, so we can waive part of the claim. And “Vezha”, in its turn, should publish retraction, ” the representative of Magdenko said.

However, the defendants disagreed. Kachor said he contested the lawsuit completely, and his lawyer added that "we do not see any opportunity to talk about friendly agreement now," and he told to be willing to consider the case further.

IMI reported, on December 10, in Vynyitsa the pre-trial hearing on the assault against the editor-in-chief of "Vezha" newspaper, Andriy Kachor, was held, as to “Vezha” website.

Artem Artemenko, adept of the Shariy’s party is charged with “deliberately inflicting of beating, bodily harm of moderate and grievous due to legitimate professional activity of journalist”.

At the pre-trial hearing, the parties had to express their views as to indictment, which set out all the facts of the case. Thus, the Prosecutor's Office representative, the editor in chief’s lawyer and Kachor himself told that all facts were set out correctly in the indictment text and in compliance with the requirements of the current legislation.

In addition, Kachor's lawyer, Natalya Gurkovska, said her client would not file a civil claim for moral or material damages:

As IMI reported, on July 11, 2019, the editor-in-chief of the Vinnytsia news portal “Vezha” Andriy Kachor said that he and his family, and his colleagues have been threatened by followers of pro-Russian video blogger Anatoly Shariy.

The threats began after the July 8 publication of the news relating how the Shariy’s party propaganda hand-outs were burnt by unknown Vinnytsa activists.

On July 12, the investigators of the Vinnytsya police department started a criminal investigation into the threats on the grounds of Art. 345 (1) of the Criminal Code of Ukraine ("Threat or violence against the journalist").

Within hours of its publication, Shariy posted a 15-minute film about Kachor, his wife and son, on which he threatened and insulted the journalist's family. Over the next few hours, Kachor and his family, as well as the journalists for “Vezha” received hundreds threats of physical assault from Ukraine, Russia, the ORDL and the Crimea.

The employee of kindergarten, where Kachor's son goes, also joined the hazing. According to him, under Shariy's post, she, reported "what kindergarten my son goes to, detailing his location."

On August 31, 2019, in Vinnitsa, an unidentified man beat Andriy Kachor, editor-in-chief of “Vezha”. The journalist was hit after he answered affirmatively the question whether that was him who had written about blogger Anatoly Shariy.

Police detained the suspected of beating, that was a 27-year-old resident of the regional center. However, later the police released the detainee, explaining that, since "the crime was not serious, there was no reason to detain that person".

In October 2019, the suspected assaulter of Andriy Kachor, a resident of Vinnytsia region, Artem Artemenko, was charged under the Part 2 of the Art. 345-1 (“Deliberately inflicting mild or moderate bodily harm to the journalist, his close relatives or family members in connection with his legitimate professional activity of journalist”).