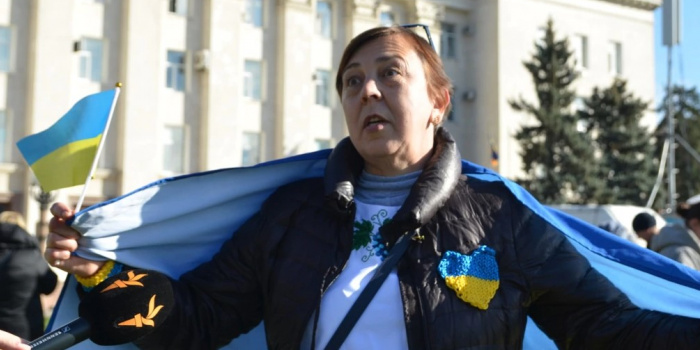 Pro-Ukrainian TikTok blogger, kindergarten teacher Olena Naumova, who had previously been abducted by the Russian military in then-occupied Kherson, said that she had been forced to record a video apology to the Russian army. She spoke about this in her interview to Radio Liberty's project "Novyny Pryazovya".

According to Olena Naumova, the occupiers came to her home on the Ukrainian Flag Day, August 23, and interrogated her for four days.

"They searched the house, took me 'to the cellar', asked a lot of questions, interrogated me for four days. Then they just left me there for week, starving and freezing, going crazy from all the sounds. Then I was forced to record an apology to the Russian army for calling for their murder, and to the collaborators who sided with the Russians here. They took me home and said, 'We have no use for you here, we will deport you to your Ukraine,'" the blogger said.

But Olena's so-called "deportation" dragged on until the de-occupation of Kharkiv oblast, when reports about the mass graves discovered near Izyum started coming.

"They (the occupiers. – Ed.) came and said that I would be leaving soon. I ask, 'What day should I book a ride for?' They answer: 'We'll take you ourselves.' Yes, I think, you'll take me yourselves – to the nearest forest strip. I realized that I had to make a run for it," she said.

According to Olena, in order to save her life, she had to stage another kidnapping. Some people hid her under the condition that she would have no contact with anyone.

"We pretended that I had been taken away. I thought, let the FSB and the GUR figure out who took whom, since it was them who was demanding money. So let them think that one of them did it. And so I left the house, it stayed open for four days, until my relatives came and shut all doors. Some people simply hid me on the condition that I would not have any contact with anyone, right up until our Armed Forces come back. That's how I was saved," said Naumova.

She learned about the de-occupation from the people with whom she was hiding: "The person who was hiding me went to the store, then ran back shouting, 'Olena, our troops are in the city. The UAF, our dearest, are in the city.' I say, 'It can't be.' We started crying, hugging. We ran out into the street, stood at the intersection, waited for our soldiers, saw them, started waving at them, took out the flags, then I said, 'Let's go downtown.'"

Olena says that the emotions at the fact that the city is free from the occupiers still overwhelm her. "I've only known greater happiness when my son was born, and then this day – 11.11.2022. This will be my second birthday, and of our city, too," she said.

The woman says that she will start making TikTok videos again as soon as there is power and a stable Internet connection in the city.

Olena Naumova is a teacher at Kindergarten No. 41 in Kherson. While the city was under Russian occupation, the woman was talking about the life there on TikTok, where she is known as vyhovatel_iz_humorom ("Educator with humor").

As IMI reported, Olena Naumova filmed TikTok videos in which she talked about life under occupation and also expressed support for Ukraine. On August 23, the Russian military kidnapped Olena Naumova from her home in temporarily occupied Kherson. She was released on September 6. Later, a video of her apologizing to the Russian army appeared on the Internet.

The blogger's second abduction, as it turned out, was a setup – her son confirmed this. According to Mykola, on September 19, representatives of the occupation authorities (Mykola calls them "curators") asked Olena if she was ready to leave for the free Ukrainian territory. The woman agreed, and her relatives have not seen her since.