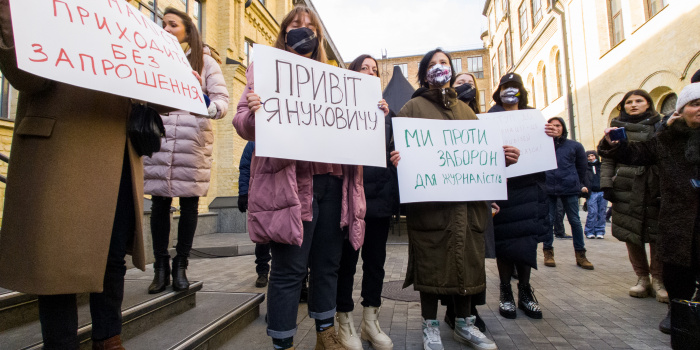 Journalists who were not invited to the press marathon of the President Volodymyr Zelensky held a rally in Kyiv.

About 10 journalists took part in the rally. In particular, among them there was an investigative journalist with "Zaborona", Tetyana Kozyreva.

Journalists pointed at the selective manner to grant accreditation to the media covering the meetings involving Volodymyr Zelensky.

The media held placards: "Regards to Yanukovych", "Access to information is not a privilege, but a duty", "We stand against bans for journalists".

Investigative journalist Tetyana Kozyreva said in a comment to IMI that the protesters did not understand how the lists of journalists for the press marathon were formed.

“As journalists, we do not understand the format of the press marathon, we do not understand the format of the meeting with journalists, where there is no accreditation procedure. We do not understand what an invitation for journalists is. Invitations for journalists are not defined by any law. We would like the president to live by the law on information, which clearly spells out the accreditation procedure for the media. We are also concerned about the fact that media lists have been compiled, but it is unclear on what principle. It is unclear why these lists do not include journalists who have conducted high-profile investigations over the past year. In particular, as "Bellingat", or the editorial board of "Soromno", which was engaged in the investigation of "Wagner-gate", or Slidstvo.Info, which dealt with the topic of the president's offshore. It is obvious that these topics are inconvenient for OP and Zelensky, so there is a strange selection that does not correspond to democratic values ​​at all. ” as Kozyreva said.

Kozyreva expressed hope that the President's Office and Zelensky's press service "will make conclusions, and communication with the media will be more transparent in the future."

There was no reaction from the OP to the journalists' action, Tatiana added.

Those journalists whom they failed to invite, are going to picket.

Serhiy Nikiforov, spokesman of the head of state, made public the list of the media invited to the press marathon, the list included 32 persons.