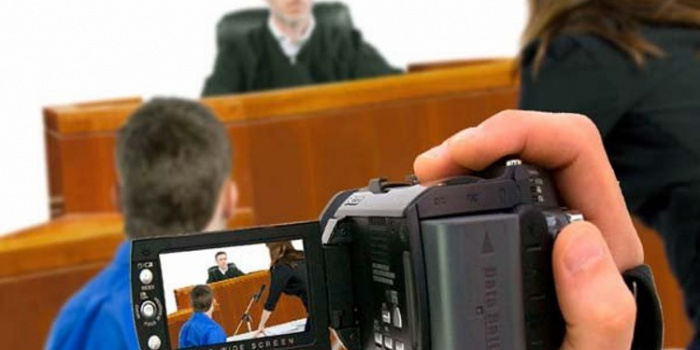 On September 23, the Kirovsky District Court of Dnipro held a preliminary hearing in the case of beating cameramen of Dnipro TV channels on July 2. Journalists were not allowed to attend it. Olena Rostovtseva, a journalist from Suspilne in Dnipro, reported it to IMI.

Olena Rostovtseva said, she had sent a request on the day of the meeting with a request to authorize her to trecord the hearing on video, but received a response just before the hearing.

“When I arrived in court, the secretary told me that she had sent an e-mail five minutes ago. I checked the mail, and really - there was a refusal, "- said Olena Rostovtseva.

The official reply of the court stated that "the case is being heard in the courtroom ... with an area of ​​35.1 square meters with the participation of members of the court, the prosecutor, the accused and their defenders, victims and their representatives (estimated number of participants is 13 people) ".

Referring to the decision of the Cabinet of Ministers on epidemiological restrictions for yellow level of epidemiological danger, the court said in a written response that “it was impossible to place in the court room other persons than those who are involved in the court proceedings and to abide by the relevant sanitary and epidemic preventive measures”.

According to Olena Rostovtseva, only a journalist from the OTV TV channel was allowed into the courtroom and allowed to film the hearing only on the phone. The film crew of channel D1 was also not allowed in the hall.

At this court hearing was supposed to issue the indictment for the beating of the operators of OTV and D1 TV channels, which occured on July 2 in Dnipro during the dismantling of advertising structures. Three persons were declared suspects under Part 1 of Art. 171 ("Obstruction of lawful professional activity of journalists") and part 2 of Art. 345-1 ("Threat or violence against a journalist") of the Criminal Code.

As Suspilne Dnipro reported, the hearing was postponed to September 24.

"The defense has filed a motion to return the indictment, so far all participants in the trial have commented on the motion, the court hearing has been postponed," Public Prosecutor Ivan Boyko told the Public Prosecutor.

IMI lawyer Ali Safarov considers such a denial by the court to be not well motivated.

He reminded that on September 20, the Cabinet of Ministers passed new rules banning mass (cultural, sports, entertainment, social, religious, advertising, scientific, educational, professional, thematic and other) events in the yellow zone (in particular, in entertainment establishments (night clubs) and catering establishments) with the participation of more than one person per 4 square meters.

“However, the court hearing is not a "mass" event. In addition, according to part four of Article 25 of the Law of Ukraine "On Information", a journalist has the right to get in, in particular, to the quarantine zone. The journalists notified of their willingness to attend open court hearing, so the court knew it in advance and could prepare a room that would meet the quarantine norms. Instead, the court denied the journalists permission. Such actions show signs of violation of the publicity of the trial and obstruction of the legitimate professional activity of the journalist, "Ali Safarov said.