Journalists in Rivne inspecting lockdown observance in church not let in 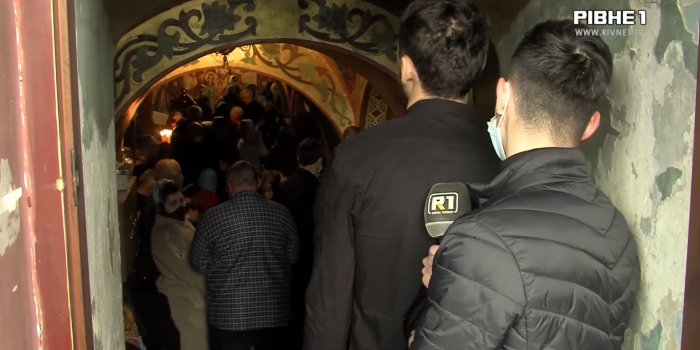 Screenshot from the video footage of "Rivne 1"

The TV crew of Rivne 1 TV channel was not allowed to enter the premises of the Resurrection Cathedral on April 7, where the service of the Ukraine Orthodox Church of Moscow Patriarchate community took place on the occasion of the Annunciation, as “Rivne 1” reported it.

They barred the way to the TV crew at the entrance to the church not letting them in, while the church was filled with parishioners who were without masks and keeping their distance.

For the second year in a row, the journalists filmed a story about the services of the Annunciation amid the lockdown time.

The film crew tried to film two services that took place in the church. They could film the office which was served in the upper church without hindrance. But not another office served in the lower church, where the Moscow Patriarchate held its services.

“At first, a man approached us, it seems to be just a parishioner, and he said that we have no right to take pictures there. After that, we went inside, and then allegedly one of the church workers barred us the way, without explaining nothing. I tried to get in from one side and the other, but a man in a black shirt approached me in from the side I did. In the end, he let me in, but only me, my cameraman stayed outside, "- said the journalist of the TV channel" Rivne 1 " Ilya Tomashevsky commenting on the incident to the representative of IMI in Rivne region.

The man who blocked the entrance to journalists did not name himself, despite being asked to do so. Ilya Tomashevsky said that there was no aggression from the parishioners. At the same time, it was difficult to film what was happening in the temple.

“We did take a few shots, but I guess the obstruction took place, because the cameraman had to raise the camera as much as possible to record the video and ask people to step aside. [...] In my opinion, the way to the lower church was blocked because they understood what was happening there. People not wearing face masks, crowding one after other, and this is during the period of daily anti-records of coronavirus incidence, ”Ilya Tomashevsky told IMI.

After the journalists came, the number of parishioners in the church decreased: some left the room through another entrance.