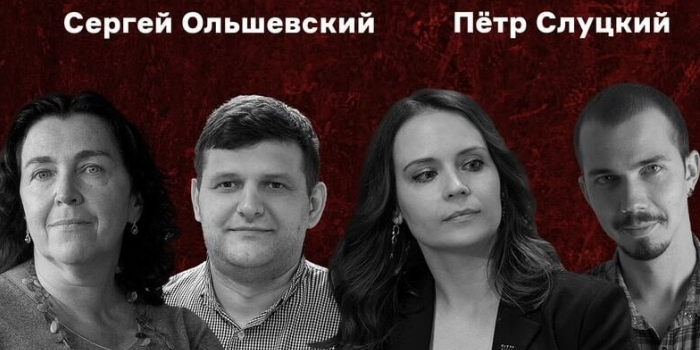 Four employees of Belarussian Press Club have been remanded in custody for another two months: Yulia and Petro Slutsky, Alla Sharko and Serhiy Olshevsky. The daughter of the founder of the Press Club Oleksander Slutska said about it on her Facebook page, as “Detektor Media” reported.

“The terms of detention were extended for another two months, until June 23. There are no results of the tax audit. It seems that the damage, they had calculated at the very beginning, was redeemed relatives a long time ago. No investigative actions are conducted on Yulia and Petro Slutsky, Alla Sharko and Serhiy Olshevsky. They stay just in jail, ”Oleksandra Slutska wrote.

In total, political prisoners have been in prison for four months.

Searches took place within the criminal case under Art. 243 part 2 (“Tax evasion in a particularly large amount”). After searches, the detainees have been taken for questioning to the Department of Financial Investigations of the State Control Committee of Belarus.

Slutskaya is suspected of tax evasion in a particularly large amount, Sharko, Olshevsky, Slutsky are suspected to act with her in complicity.

Belarusian human rights activists have recognized the detained employees of the Press Club as political prisoners.