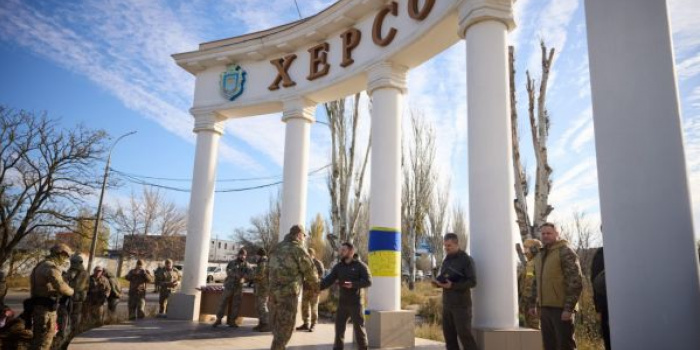 A group of journalists who joined the November 14 press tour to liberated Kherson came under enemy fire on their way back to Mykolaiv.

NikVesti correspondent Serhiy Ovcharyshyn told the IMI representative in Mykolaiv oblast about this.

According to him, after the press tour, on their way from Kherson to Mykolaiv, the organizers offered to stop by the "Gates of Kherson" stele, which is on the way out of the city. "Yes, we stopped near the stele to take photos, and two missiles fell nearby, about 300 meters away from us. Right as I was filming," said Serhiy Ovcharyshyn.

Vitaliy Kim, the head of the Mykolayiv RMA, published a video of the explosion, taken by one of the foreign TV channels, on his Telegram. "It's still not quite safe in Kherson oblast," he wrote in the caption to the video.

The video shows the journalists who were on the street at that moment hurrying back to their buses immediately after the explosion. In a few minutes, the buses left the site of the shelling.

As IMI reported, on November 14, TV host and journalist Dmytro Komarov came under Russian fire on November 14 near the Antonivsky bridge in Kherson.