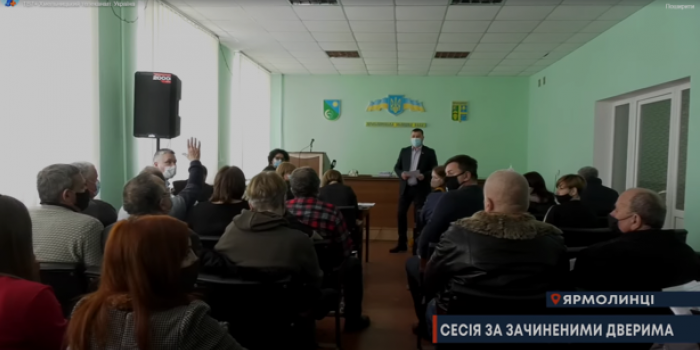 Journalists of the Khmelnytsky TV channel TV7 + were not allowed to attend the session of the Yarmolynets United Territorial Community (UTC) on March 12.

This is said in the report aired by TV7 +.

The TV crew of the TV channel arrived for the session and saw that the head of the community Andriy Shutyak first wanted to cancel the session and then initiated a closed door session. To which they agreed. Nobody in the session hall reacted to the journalists' remarks.

“Why was the meeting closed door? Because the mass media, you aming others, did not register, but attended it,” Andriy Shutyak said. According to him, the journalists had to be accredited.

Oleksandr Tsisar, the head of the legal support department, did not react to such actions of public figures either.

Lawyer of the Institute of Mass Information Ali Safarov noted that such actions contradicted the current legislation. “Null accreditation is not a reason for denial of access for the journalists. This is in fact a criminal offense under Article 171 of the Criminal Code of Ukraine. This is an obstacle to the legitimate professional activity of journalists, ”he said.

Journalists related this reaction of the management of Yarmolynets UTC with the unwillingness to make public the consideration of "land" issues in the "Miscellaneous" section of the agenda.

According to the head of the TV channel Anatoliy Vinskevych, the representative of IMI in Khmelnytsky region Alona Bereza, TV7+ will file a complaint to the police over obstruction to professional activity of journalists.

We will remind, IMI reported earlier, what are the terms to hold closed door sittings in city councils.