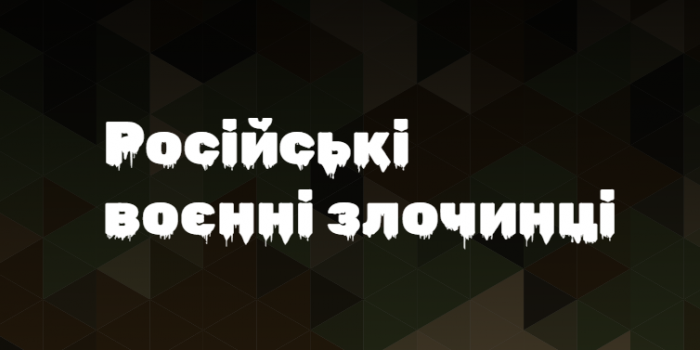 In half a year of the full-scale war, public activists from the Anti-Corruption Staff and journalists from Slidstvo.Info have collected 148,631 profiles of russian military personnel into an online register Russian War Criminals.

The troops' profiles include information about the specific crimes that an occupier may have committed: this data is supported by references to journalistic investigations and the authorities' official suspicions.

The online register is compiled of lists published by the Centre for Defense Strategies and the Chief Directorate of Intelligence, the "Search for Your Own" database, social media, and journalist investigations.

The goal of the project is to help collect evidence of crimes committed by specific individuals during the hostilities for further use in Ukrainian and international courts.

Serhiy Mytkalyk, head of the Anti-Corruption Staff board, noted that of all the similar services in Ukraine, this database is the largest. "Our task is to make it so that every russian criminal who has given orders, killed Ukrainian citizens, or destroyed our infrastructure is punished. We have collected the most comprehensive database – almost 150,000 profiles," he said.

Anna Babinets, head of Slidstvo.Info, reported that Slidstvo.Info journalists have already proven the participation of about 200 russian soldiers in the war in their materials.

"We, as investigative journalists, took proving which of the russian troops did what specifically and in which specific settlement as the main course of our work. We understand that sometimes it looks like scooping up the ocean with a spoon, but this is our job – to search and prove the involvement of each one," she said.

"When the Prosecutor General's Office announced the first 10 suspicions against russian military personnel in April, seven of these russians had been identified by our journalists," Babinets added.

In addition, the chairman of the board of NGO Anti-Corruption Staff Serhiy Mytkalyk also cited numbers that show how difficult the investigators' work is: out of 25,000 cases, only 93 suspicions have been announced, of which there were only eight indictments, Ukrinform reports.