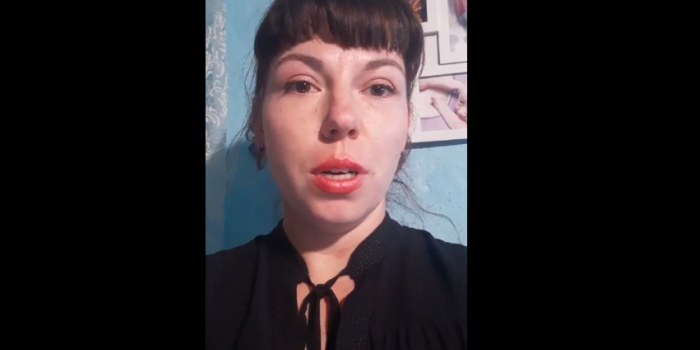 Lyubov Velychko said it in a video to the head of the national police Ihor Klymenko, which she posted on her Facebook page on October 27.

The journalist said this was due to the investigation "Work for Russia, offshore and "computer wholesale: how the online casinos do work in Ukraine ", which was published on October 22 on the site Mind.ua. The article revealed some illegal schemes of illegal casinos, which involved a number of Ukrainian companies, including Kyivstar, Lifecell and Leogaming Pay (owned by Alyona Shevtsova).

According to her, she received a threatening text message on her mobile phone.

“Bitch, are you bored? See coming search and watch out! Calm down for for a while, it will be soon! ” – the message said.

"I have a well-founded suspicion that these threats come directly from the spouses of Alyona and Yevhen Shevtsov.(…) It is not for the first time that the Shevtsovs have blocked the site because of the mention of their names in the stories about the work of illegal casinos. <…> This is illegal. I urge the head of the National Police to review their staff and conduct an internal inspection. I will apply to the National Police to investigate in the threats against me as a journalist, ”the journalist said.

Velychko also said that Alyona Shevtsova is currently preparing a lawsuit for one million hryvnias (around $35 K) in moral compensation. "I take it easy to go to court, because everything is supported by documents," the journalist said.

As IMI reported, on September 11, Lyubov Velychko said that the investigative department of the Brovary Police Department of Kyiv region opened criminal proceedings for interfering with her work and work of administrators of about ten telegram channels by Olga Shariy, the leader of Shariy Party.

On August 20, the Brovary City District Court of Kyiv region ordered police to enter in the Unified Register of Pre -Trial Investigations information about a criminal offense committed against journalist Lyubov Velychko by Olga Shariy, Shariy Party leader, under Article 171 of the Criminal Code (Obstruction of lawful professional activity).

On July 29, journalist Lyubov Velychko filed two complaints concerning death threats against her, and obstruction of her journalist activities after publication of her investigation about Russian Telegram channels “Telega" for the Servant. How Telegram channels that probably get updated from Russia affect the work of the Rada."

On July 30, Kyiv Region police opened a criminal investigation into threats against journalist Lyubov Velychko on the social network under Part 1 of Article 345-1 of the Criminal Code of Ukraine ("Threat or violence against a journalist").

Earlier, journalist Lyubov Velychko reported on the threats she began to receive after the investigation into Russian telegram channels.

On August 27, Texty.org.ua journalist Lyubov Velychko reported that on August 26, her car was chased by a dark Chevrolet Lacetti. She related the persecution to her interview "Wagner Special Operations Coordinator" about her failure: "This is a banal betrayal" (INTERVIEW, VIDEO, DOCUMENTS), published on August 24 on the Mind website.