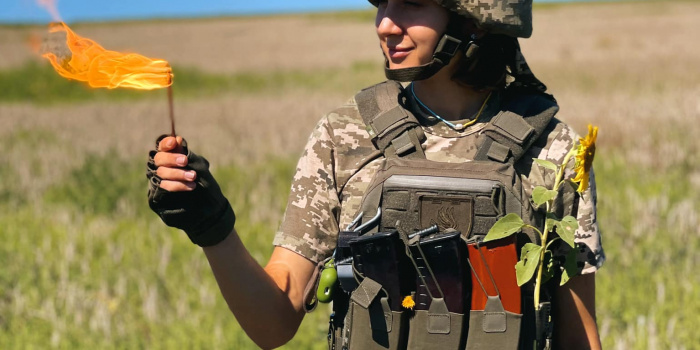 She spoke about this in an interview with Iryna Sampan, a journalist for the "Butusov Plus" YouTube channel.

The house is located in Dovhenke village, Kharkiv oblast. According to Anastasia, Oleksandr was sitting on the stairs when a Russian tank pulled up in front of the house and opened fire.

Oleksandr was wounded in the lung.

"Sasha's brothers in arms said, 'You will see a shop there, and a house.' And I realized that this is it – the place," the servicewoman said.

Oleksandr Makhov, journalist and serviceman of the Armed Forces of Ukraine, was killed in action on May 4 near Izyum, Kharkiv oblast. He was 36 years old. In civilian life, Oleksandr worked for the channels "Dom", "Ukraina", and "Ukraina 24".

A month before his death, he recorded a video for Anastasia Blyshchyk, proposing to her with a hand grenade ring instead of an engagement ring.

On June 23, during the opening of photo exhibition The War Is Not Over Yet about journalists in the war, journalist, Ukraina 24 correspondent Anastasia Blyshchyk told the story of Oleksandr Makhov.

He was posthumously awarded an Order "For Courage" III degree.

Anastasia Blyshchyk used to work on the "Ukraina 24" TV channel.