Iryna Zemlyana, who doused the russian ambassador with fake blood, forced to leave Warsaw due to threats from russians 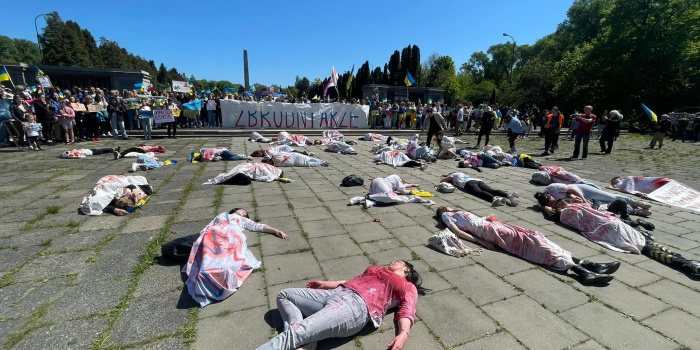 IMI expert and activist Iryna Zemlyana, who doused Russian Ambassador to Poland Serhiy Andreev with fake blood at a May 9 rally, was forced to leave Warsaw due to threats.

This was reported by Ukrinform with reference to Iryna Zemlyana's Facebook post. According to Zemlyana, in the first hours after the action all her details, including passport number, phone number, address in Ukraine, e-mail, all social media accounts, were posted on russian Telegram channels calling for her "extermination." Zemlyana has been added to the russian "war criminals" database.

In addition, Zemlyana reports that threats to her life and health are coming every minute: "Messages come with threats to kill, maim, rape me, etc., as well as a lot of insults. Absolutely ALL my messengers are flooded with texts. An unknown number calls my phone every three minutes, an email arrives every minute, all mail is cluttered (I don't understand how to go about my work yet), the phone is unusable. 25,000 bots followed me on Instagram in a couple of hours, and all that."