In Poltava, security bared the way for journalists to city council 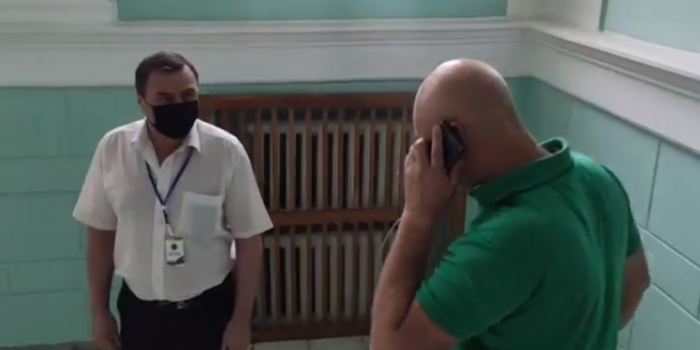 Photo credit: Screenshot from the video of Mykola Lysoogor

Security guards of the Poltava City Council did not allow journalists of online publications "Poltavshchyna", "Zmist" and PTV channels, "Suspilne.Poltava" to the premises of the City Council, where the Security Service of Ukraine (SBU) making a search on the first floor on 2 of September.

Mykola Lysogor, journalist for "Poltava region", shom they denied access, reported it to the representative of IMI in the Poltava region.

Mykola Lysogor said, the security guard at the entrance denied them access to the first floor on behalf of Poltava Mayor Oleksander Mamay, explaining it by protection measures of the city council. Journalists were told to contact the press service.

But, as Lysogor added, after the scandal arouse they let everybody in.

The representative of the press service of the National Police in Poltava region Roman Grishin told the IMI representative that this is forbidden to let the press in during the searches. He added that Mykola Lysohor did not call the police to the scene upon the fact of denial of access.

As Poltavshchyna reported, law enforcement officers detained a number of officials of the executive committee, in particular, they undertook investigative actions in the office of the chief architect of Poltava Mykola Shevelyov.

IMI lawyer Ali Safarov noted that only authorized persons could restrict admission to the place where the investigative actions are underway due to the secrecy of the investigation, the city council guard was not authorized to do that.

"The secrecy of the investigation is indeed one of the legal cases of restriction of information, including restriction of admission to the place of investigation, including searches. However, it should be noted that only authorized persons are entitrled to apply such restrictions. Security guards or other persons are subject to the general provisions of the current legislation, in particular Article 25 of the Law of Ukraine "On Information", which guarantees unimpeded access for journalists to the premises of entity of power, as well as the right to be present at the scene of accidents, catastrophes, riots. etc. ", - the lawyer of IMI noted.