In April, IMI recorded 18 cases of violations of freedom of speech in Ukraine

In April, IMI experts recorded 18 cases of violations of freedom of speech in Ukraine (January - 19, February - 18, March - 25). 16 of them concerned physical aggression against journalists.

These are the figures of the monthly monitoring held by the Institute of Mass Information " Freedom of Speech Barometer".

The highest number of violations of journalists' rights in April was recorded in the categories of “obstruction to lawful journalistic activity” (nine) and “beatings, attacks” (four). 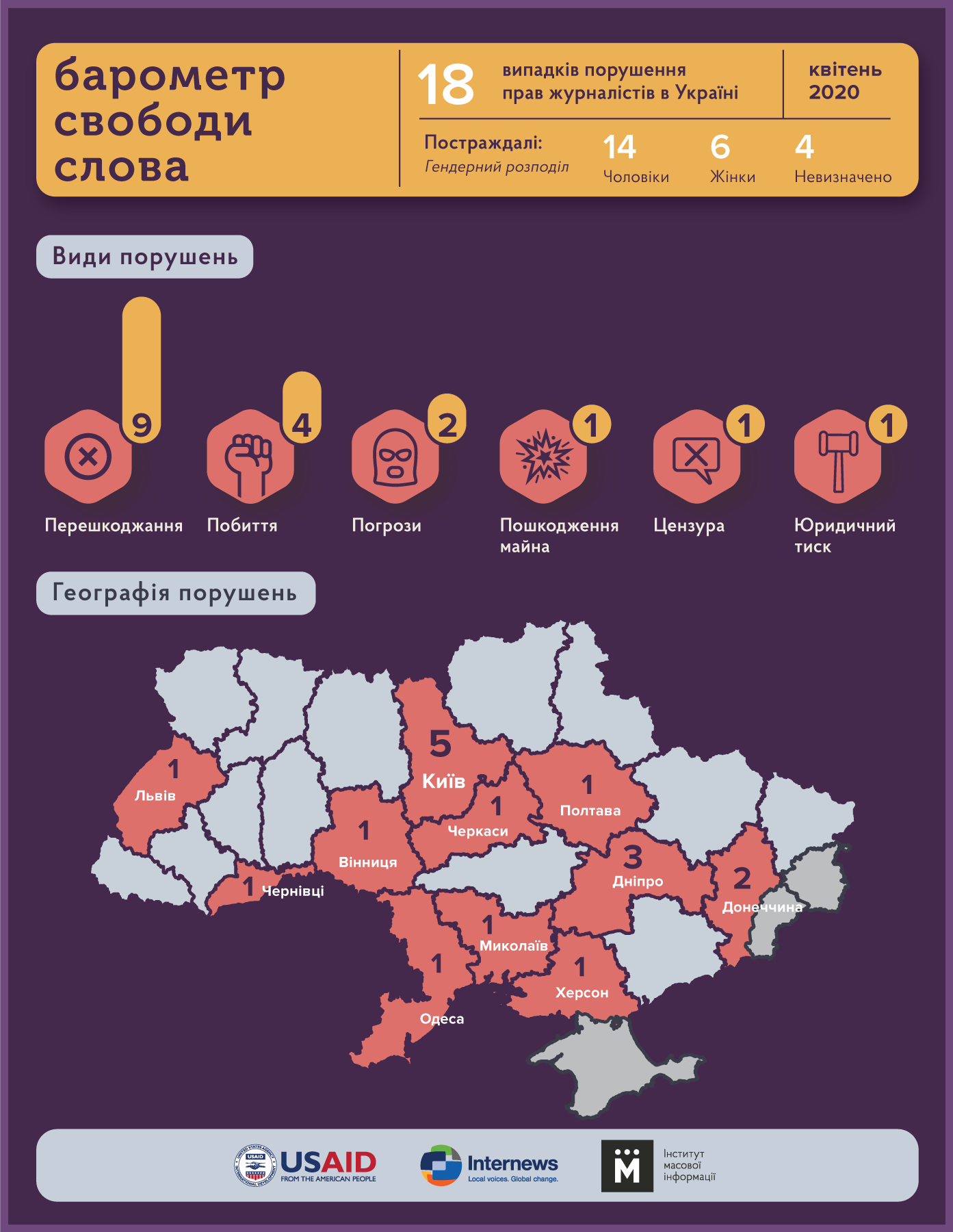 For example, in the Kyiv Hydropark, the TV crews with ZIK and Espresso TV were attacked by unknown men during inspection of quarantine, and the law enforcement officers attacked journalist with Hromadske Bohdan Kutepov in front of the Cabinet of Ministers.

In addition, IMI records facts of obstruction to journalistic activity exerted by local authorities, which did not allow journalists to attend their sessions, which, in particular, took place in public places. The authorities justified that denial to provide access with quarantine measures. At the same time, journalists claimed of selectivity in admission to the session and failure to provide the mass media with information by other means.

Also this month, we observed two incidents involving the representatives of churches and in both cases it was Ukrainian Orthodox Church of Moscow Patriarcate: in Odesa, a security guard at the Ilyinsky Monastery of the Ukrainian Orthodox Church of Moscow Patriarcate attacked Vladyslav Shvets, photojournalist for the USI online media. Vladyslav Shvets was filming a report on preparations for Easter. The guard pushed him and knocked the camera ooff his hands.

Archimandrite Mykyta, Secretary of the Chernivtsi-Bukovyna Consistory of the Ukrainian Orthodox Church of Moscow Patriarcahet, came to the Young Bukovynian editorial office when he learned about the publication saying that the head of the diocese had pneumonia, he coughed inside the editorial office, and then asked the Security Service of Ukraine to close the newspaper Young Bukovinian for absolute quarantine.

Thus, since the beginning of the year, IMI has recorded a total of 80 violations of freedom of speech, 40 cases of obstruction, 10 cases of beatings and seven - threats.

Read more about the state of freedom of speech on the IMI website in the " Freedom of Speech Barometer " section .

The Institute of Mass Information conducts monthly all-Ukrainian monitoring of freedom of speech in following categories: physical aggression, censorship and access to information, economic and political pressure, legal pressure and cybercrime against the media and journalists. Only cases related to freedom of speech and professional journalism are included to the monthly report.