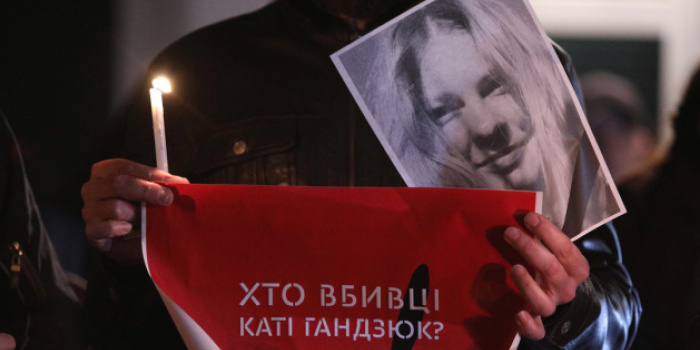 Full text of the statement follows:

We, Ukrainian human rights organizations, consider it inadmissible to сover the instigators of the murder of Kateryna Gandzyuk and we urge the law enforcement agencies to investigate not only the murder, but also sabotage of the investigation.

On November 4, 2018, when the appalling news of Kateryna Gandyuk's death stirred up, the law enforcement officials made another round of statements saying that all necessary investigative actions were being carried out to punish those responsible for the murder. However, in the course of the year, apart from the sentences to five perpetrators of the crime, no indictment for those whom the investigators considered as persons involved in organizing and sponsors of that murder have been referred to the court. Thus, the eventual instigator of the attack, Oleksiy Levin, whom they pressed suspicion, went abroad after the police had disclosed the case files. Now he is hiding from the investigation. Arrested shortly after the death of Gandziuk, Igor Pavlovsky, who, according to investigators, was an intermediary in the organization of the crime, was subsequently released by the court under personal obligation and did not appear in court for the fourth time. Vladyslav Munger, whom investigators, as well as Kateryna's relatives and friends call one of the instigators of the murder, has been released from custody on a bail of 2.5 million hryvnias and is now likely to escape a fair trial. The other accomplices of the murder have not yet been named.

It is important to note that even such small progress in the case were made possible by the strong pressure of the “Who ordered Katya Gandyuk? ” initiative, monitoring of human rights defenders and the mass media, investigations the journalists made and the vigilance of the international community.

Today, we see statements made by the heads of the Prosecutor General's Office of Ukraine and representatives of the Security Service of Ukraine about significant progress in the investigation. Unfortunately, we had heard the same statements with no consequences that the previous superiors of law enforcement bodies made.

Impunity in the case of Kateryna Gandziuk and other activists, conclusions failed to be made by the authorities and the law enforcement officials on several previous assaults, have generated another wave of violence against civil society. We urge finally to put a safety devise in form of efficacious investigation and justice.