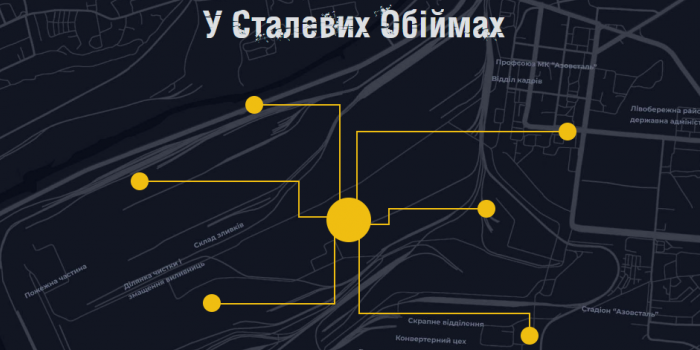 On August 22, Hromadske presented In Embrace of Steel: a special project about "Azovstal," a collection of the stories of soldiers, volunteers, doctors, factory workers, and Mariupol residents who were at "Azovstal."

The plant's bomb shelters provided cover to the first Mariupol residents immediately after the start of the full-scale russian attack. Given the large territory, often people who knew each other often did not even know that they were at Azovstal at the same time.

Meanwhile, the enemy's circle around the plant was shrinking, turning the plant from a fortress for the military into a trap. The soldiers were running out of ammunition, and infrequent weapon and food deliveries by helicopters did not turn the tide. The military doctors, who set up their operating rooms and wards right in the bomb shelters, were also running out of medicine, and the number of wounded was increasing...

On May 20, regiment commander Denys Prokopenko posted his last video address from the plant: "The high military leadership gave us the order to preserve the lives and health of the garrison's soldiers and stop the defense of the city. Despite the heavy battles, the all-around defense, and the lack of supplies, we constantly stressed the three most important conditions for us: civilians, the wounded, and the dead."

The defense of Mariupol lasted 86 days. During this time, the Azovstal plant became a grave for dozens of soldiers and civilians. Some bomb shelters could not withstand 5-ton bombs and collapsed, burying people under. But the walls of "Azovstal" have also protected and saved the lives of thousands of Mariupol residents who, despite the russian shelling, still managed to evacuate.

The project tells the stories of people who might not have crossed paths had it not been for the war.