From radio host to fixer: Lviv resident Yuriy Shyvala speaks about his work with foreign media 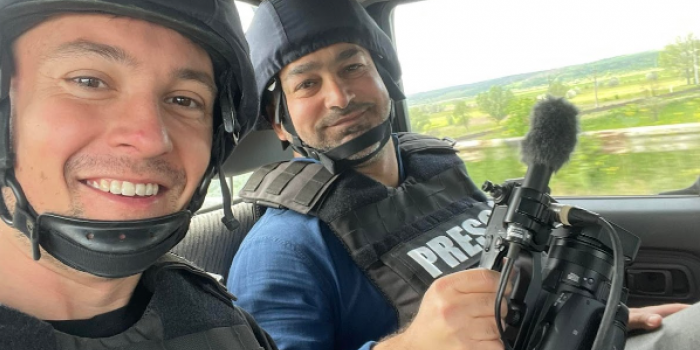 "Lvivska Khvylia" radio host Yuriy Shyvala became a field producer for foreign media effectively at the very beginning of russia's full-scale invasion. He has already had the chance to work with colleagues from the US, Norway, France, Turkiye, and Poland.

Yuriy Shyvala spoke about this in his interview with IMI.

These were printed publications as well as radio and TV media outlets. Together with foreign journalists, he has been working on reports and documentaries, and has visited 11 regions of Ukraine.

Yuriy said that the content that will be broadcast to the multi-million global audience depends on the fixer. After all, according to him, a fixer's job includes finding interesting topics, characters, arranging interviews, as well as explaining the local context to foreign journalists.

"We, the local people, understand the context of the events that are unfolding. Journalists who are visiting may often know the context to some degree. Or not know some local specifics. Therefore, many things need to be explained to journalists and it is necessary to detect the narratives that they may let slip – not often, but sometimes. For example, russia has been pushing the narrative about the Azov Regiment being Nazis. Journalists who come here want to find out who these Azov guys are," he said.

For Yuriy Shyvala, he hardest thing was working in Bucha and on the front line. However, according to Yuriy, this work is important and people should see what is happening there.

"You come to Bucha and see dozens of decomposing corpses, you see people who are finding the bodies of their relatives. This is all very hard morally. You certainly never dreamed or thought that you could see horrors such as those that took place in the occupied territories within your arm's reach. But you need to get yourself together and communicate with people, with the victims, the victims' families. The second hardest thing is working on the front line. You realize that literally every five minutes there is shelling, you and your team can't be standing in one place, a projectile can fall a few dozen meters away from you," added the fixer.

For instance, in Lysychansk, journalist of the French TV channel BFMTV Frédéric Leclerc-Imhoff was killed just a few blocks from Yuriy Shyvala and his team. They had stayed in the same hotel and had breakfast together the day before.

The fixer noted that he did not notice any difference in the work of foreign and Ukrainian media. Popular world media arrive with a lot of equipment and security guards. Everyone else comes bringing their equipment and means of personal protection. However, everyone follows the journalistic standards.

"Despite the fact that journalists adhere to the principle of neutrality and objective coverage of information, of course they support the Ukrainian side. They are surprised by the absurdity of this war, by why it started, that russia came up with its imperialist and propagandistic theories about some imaginary Nazis, brother nations. Many journalists have worked in Syria, Iraq, and Afghanistan, but they are shocked at how brutal and bloody this war is. They are shocked by the war crimes of the russians," says Shyvala.

Yuriy Shivala has the following advice to those who plan to go to hot spots to cover the events: