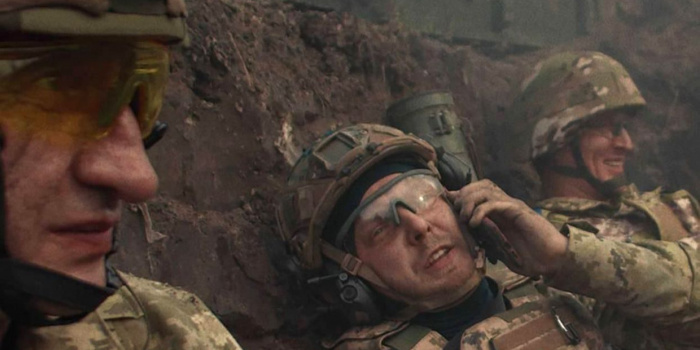 On October 31, at 5:00 p.m., the movie "Ukrainian War Stories" will premiere in Kyiv. This was announced by the film's producer – the head of the public relations service of the Armed Forces of Ukraine, Colonel Oleksiy Dmytrashkivsky.

"Ukrainian War Stories" are based on real life events, filmed on locations of actual combat operations and with the participation of active military personnel. 95% of the filming crew and cast are servicemen of the UAF Territorial Degense Forces. This is the first time in history that a war movie is filmed by the military at war themselves. The script is based on material collected by war correspondent Heorhiy Ak-Murza (Odesa). The filming took place in Kharkiv, Kyiv and Odesa oblasts; the 122nd, 126th and 127th TDF brigades took part in it. The movie was filmed using real ammunition, real mines, grenade launchers, TNT grenades and heavy armored vehicles. Villages liberated from the enemy, trenches, dugouts and even minefields were used as filming locations," the film's description says.

At the premiere, the audience will be able to meet the actors and authors of the film, see the backstage footage. Also, the crew will share the thrilling experiences of filming 15 kilometers away from the enemy, speak about safety measures and checking the minefields before shooting, about the intercepted radio conversations as the enemies watched the unusual lighting over the horizon next to them.

You have to register to attend. To do that, contact Valentyn Kalashnyk (Public Relations Service of the Territorial Defense Forces of the Ukrainian Armed Forces) at +38 (050) 331 11 99.

As IMI reported, director Maryan Bushan's debut film "Sniper. White Raven," created with Derzhkino's support, became the first Ukrainian war-themed film that was released on the big screen after the start of the full-scale invasion.