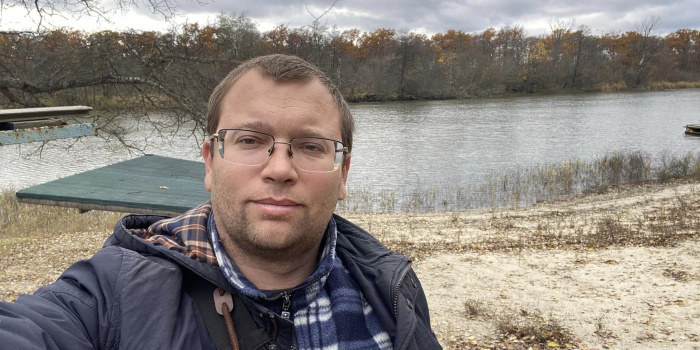 Recalling the beginning of Russia's full-scale invasion of Ukraine, Radio Liberty freelance journalist Serhiy Horbatenko noted that for him, time has blurred into one day after February 25, 2022, and that we are still in this day.

He said this in his interview to the Institute of Mass Information.

Still, he stressed that it was on February 24 that he was feeling numb and had a hard time working.

"Just the day before, on February 23, I was in Pisky. It was the the Sarmat motorized infantry battalion's foundation anniversary. We were on the front lines together with Channel 5 journalist Olha Kalinovska. That's where we met. I came back home, made the story. And then my editor from "Donbas.Realii", Tanya Yakubovych, called me and said, 'We talked to everyone. In case anything happens, you call me right away, let me know.' I say, 'Okay.' Because the trip from Slovyansk to Pisky was difficult, a long road. So I got a little tired. I finished my work and went to bed. And when I woke up... Well, sometimes you wake up without an alarm – I like fishing, so I don't need an alarm clock, the body itself knows when to wake. I woke up, picked up my phone, started scrolling through the news feed, and literally a minute after I woke up, the Russians attacked on the Kramatorsk airport with missiles. So it happened. I woke up and immediately there was an impact. I called my ex-wife right away. I told them to stay away from the windows. Or rather, I didn't say that. I said, 'Wake up!' And she asked, 'What happened?' I said, 'That's it, the war has begun. Take Yurchik and stay away from the windows.' Then I called the editor Tanya Yakubovych and said, 'I'm probably not the first to call you.' And she said, 'No, you are. You are the first to call me,'" the journalist recalls.

According to Serhiy, he spent most of the day sitting or lying down and scrolling through the news feed.

"But it went on like this for one day – February 24, and then everything just snowballed somehow. I don't even remember what I was doing on February 25, what topics I was working on. And, well, it all blurred into one day, which we're still in. That is, February 24 was a separate day, when my body somehow reacted in such a way that I couldn't do anything, and February 25 has been going on since then. That is, you monitor things, drive, work, edit, try to raise money for Izyum territorial defense if they need any help. For me, this day has been going on not since February 24, but since February 25," added Serhiy Horbatenko.