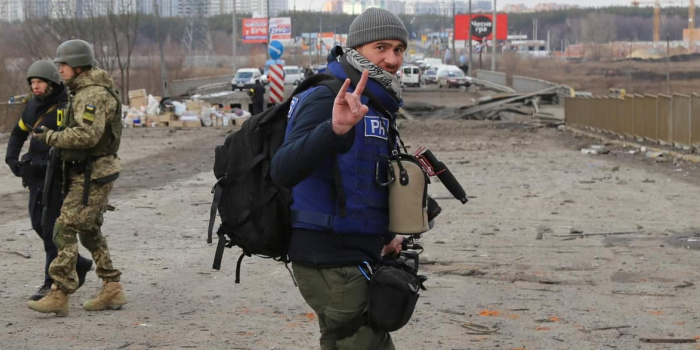 Ukrainian Service journalist Maryan Kushnir suffered a concussion during a Russian attack on Ukrainian forces outside of Kyiv in the early morning hours of March 11, as Radio Free Europe/Radio Liberty reported.

Kushnir, who was embedded with the Ukrainian troops, reported that the attack occurred at about 3 a.m. in the town of Baryshivka, about 35 kilometers east of the capital. It was unclear if it was an air strike or a rocket attack.

“They hit the location where I was near a stadium that has been used for training,” Kushnir said. “The soldiers were staying there and some of them were wounded…. Some people were injured, but I know for sure that no one was killed.”

Kushnir has worked for RFE/RL since 2015 and has been covering the war with Russia since Moscow attacked Ukraine on February 24.

Fighting in the Kyiv area has grown increasingly intense in recent days as Russian forces seek to surround the city in the face of stubborn resistance.

On March 10, Kushnir reported on an engagement between Ukrainian and Russian forces in the area.

New satellite pictures appeared to indicate that a 64-kilometer-long military convoy outside Kyiv has spread into towns and forests near the capital, with towed howitzers nearby in for an assault on the city. Armored units were observed in towns near the Antonov Airport north of the city.

The Ukrainian armed forces' General Staff said in a statement that Russian troops were advancing toward Kyiv from the northwest and east.

Kyiv Mayor Vitali Klitschko said about 2 million people had left the city and its environs.