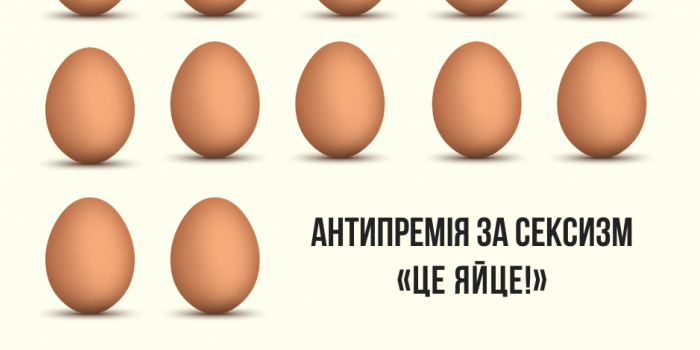 The award will be presented during the Zoom conference with a broadcast on the Facebook pages of the organizations holding this year's anti-award.

After receiving dozens of applications with nominees through the online form, the professional commission voted to select seven candidates in the "Sexist Phrase" category and six in the "Sexist Story" category. They entered the shortlist of this year's anti-award.

The commission is composed of:

Victoria Ermolaeva, editor-in-chief of the website of the campaign against sexism "Povaha" (Respect), coordinator of this year's award "This is the Egg";

Yelyzaveta Kuzmenko, Chair of the Women in the Media Association, Member of the Commission on Journalism Ethics;

Andriy Kulikov, TV and radio presenter, co-founder of Hromadske Radio and chairman of the Commission on Journalism Ethics;

Iryna Slavinska, Gender Coordinator of the Anti-Sexism Campaign in Media and Politics “Povaha";

Iryna Zemlyana, media expert and security coach at the Institute for Mass Information;

The event will be broadcast on the Facebook page of the Institute for Mass Information.

The moderator of the event is the head of the public organization Tochka opory” (Point of Support) Timur Levchuk.

On December 9, 2019, the winners of the anti- award "This is the Egg!" were announced : President of Ukraine Volodymyr Zelensky, Gender Commissioner of Zaporizhzhya Regional Council Vladyslav Marchenko, MP Maksym Buzhansky, former President of the Cycling Federation Oleksandr Bashenko, “112 Ukraina” channel and “Segodnya” website.