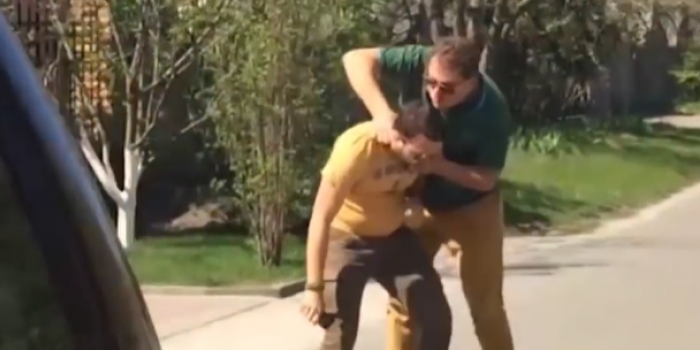 The Boryspil City District Court of Kyiv Region has acquitted the assailant in the case of obstruction to journalists of the “Hroshi” (Money) program during the filming in April 2018 of the house of the then Minister of Finance Oleksander Danylyuk. This was reported by the "Sudovy Reporter” (Judicial Reporter) .

On April 21, 2018, at approximately 2 p.m., two journalists entered the territory of the Zoloche cottage town in the village of Vyshenky in the Kyiv region. They went through the checkpoint together with a group of construction workers. Then they looked for the house of Finance Minister Danyliuk and filmed it on iPhones while standing on the roadway.

The security guards approached them, asked what they were doing, and banned from traking pictures. Then they approached again and told to leave the territory. Later, a certain Vasyl Shurupov, who called himself a resident and "chairman of the board of the town," drove up by car. His mother-in-law was allegedly sitting next to him in the car. "Take your phones to your pockets and clear out," he said.

The  video shows Shurupov getting out of the car, approaching the journalist and taking him by his neck. According to the victims, the man tried to take away their phone, but they managed to escape and save their gadgets and videos.

Then the man allegedly tried to run down the cameraman, but they did not have time to record it on video. Shurupov, according to journalists, escorted them to the checkpoint, until they left the town.

In court, Shurupov explained that in 2016-2017, they had six robberies in the street, and two months before the incident, a grenade was detonated. The victims were strangers dressed in jeans and T-shirts, so he stopped the car near his house, introduced himself and asked who they were and what they were doing here.

In response, the victim called himself a citizen of Ukraine and directed his mobile phone on him, trying to film him. The victims said they were filming some stories on Instagram, and he told them to film “the stories” near their home.

Then the journalists allegedly "behaved rudely." He did not use violence against them or strangled anyone. They did not present their press cards, did not wear the logo and identification marks of the 1 + 1 channel, and did not call themselves journalist.

Two security witnesses told the court that Shurupov did not use physical force against journalists. They did not know who these people were, so they supposed that they could be criminals taking pictures of houses to rob. The men who filmed did not introduce themselves as journalists and did not show their documents. They did not have any identification as press.

As a result, the court accepted the testimony of the guards as refuting the version of the victims. At the same time, the possible injuries of journalists are not confirmed by anything: there is no forensic examination. The words of the victims alone cannot be evidence.

The court did not take into account the fact that the witnesses were subordinates to the accused Shurupov.

According to the court, the testimony of the victim that the accused grabbed him by the neck and began to strangle him was not confirmed, but, on the contrary, was refuted by a video from the scene viewed at the court hearing, as well as another journalist's accusation saying that Shurupov pressed him to a tree and strangled him.

According to the court, there is no evidence in the video of Shurupov's intentional active actions aimed at obstructing the lawful professional activities of journalists. The judge did not find any offense also in what Shurupov did, as he approached the victims, seized their mobile phones on which the video was taken, used physical force, namely grabbed one journalist by the neck and strangled him first, and then another.

The court concluded that the victims, in  quality of journalists, were not externally provided with documents, signs, signals and other means of identifying them as the press, as provided by the Law of Ukraine of 23 September 1997 “On State Support of Mass Media and Social Protection of Journalists”.They did not show their press cards, so Shurupov had no reason to believe that the victims were journalists.

The video, which was considered as proof of Shurupov's guilt and was viewed at the court hearing, was published  on Channel 1 + 1 and is freely available on the social network.

The court finds that the victims illegally disclosed information from the pre-trial investigation without the permission of the investigator or prosecutor.

Shurupov was charged under Part 1 of Art. 126 (beatings) and Part 1 of Art. 171 of the Criminal Code of Ukraine (obstruction of journalistic activity). The court acquitted him, since there was no enough evidence corroborating that his actions constituted a crime.

As IMI reported, on April 21, 2018, in the private town of Tsarskoe Selo near Kyiv , journalists of the “Hroshi” program of the “1 + 1” channel were attacked while trying to film the house of Finance Minister Oleksandr Danyliuk. Journalists were forbidden to film the estate on the phone, tried to take away video and even tried to strangle them and run down the program operator driving SUV.

In July 2018, the Kyiv region Prosecutor's Office filed an indictment against the assailant on a journalist of the “Hroshi” program on the grounds of criminal offenses under Part 1 of Art. 126 and Part 1 of Art. 171 (beatings and beatings and obstruction of lawful professional activity of journalists) of the Criminal Code of Ukraine.