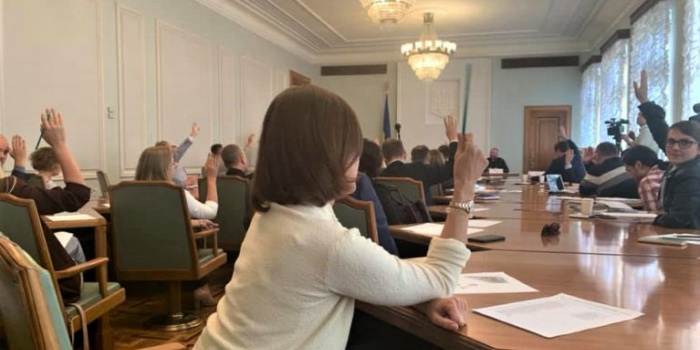 On September 16, the Office of the President held a constituent meeting of the Council on Freedom of Speech and Protection of Journalists, as ZMINA reported.

The Council includes 15 persons: six representatives of mass media and NGOs, and one official from the Office of the President, the National Union of Journalists and the Independent Media Trade Union

About 50 members of the media and NGOs were invited to the council constituent meeting. At the beginning, a representative of the Office of the President, Maksym Krechetov, handed out to the audience a piece of paper with 33 names of journalists and 11 names of NGOs.

Participants were asked to choose one name from each list, so that the counting committee would then define six journalists and six public experts with the highest number of votes. These 12 persons have to compose the council.

According to the ZMINA correspondent, several journalists present opposed to such a vote, as not every names were familiar to them, and also it was not clear what issues are to be at the focal area of the council.

After a brief discussion, the deputy head of the Office of the President Kyrylo Tymoshenko suggested that the council elected by such a vote would be temporary and would work for at least six months. In the meantime, the council had to work out several provisions to regulate the functioning of the council. The media representatives who were invited to this meeting, but who did not enter the council, would be able to make some propositions.

Mikhail Tkach and Danylo Yanevsky were not present at the meeting, so they can recuse themselves, and then candidates following in the ranking will be able to enter the council.

From the public sector, the council included: President of the Independent Association of Broadcasters Tetyana Lebedeva, Chairman of the public organization “Information Security” Tatiana Popova, media lawyer of “Human Rights Platforms” Oleksandr Burmahin, director of the NGO The “Ukrainian Institute of Media and communication” Diana Dutsyk, Director of the Center for Democracy and Rule of Law (CEDM) Taras Shevchenko and Deputy Head of the “Detector Media” Svitlana Ostapa.

At the same time, IMI’s Executive Director Oksana Romanyuk said that when its NGO had been invited to attend the meeting at the President's Office, she was told that no heads of NGOs and mass media would be included to the council. Therefore, only Roman Golovenko was invited to the meeting from the IMI, while other heads of NGOs were present at the meeting.

Maksym Kretchetov also told that different issues of freedom of speech will be distributed among the 15 members of the council.

They divided these questions into the following sections:

The Freedom of Speech Council will be an advisory body, it is function is to be formalized after the President has signed the relevant decree.