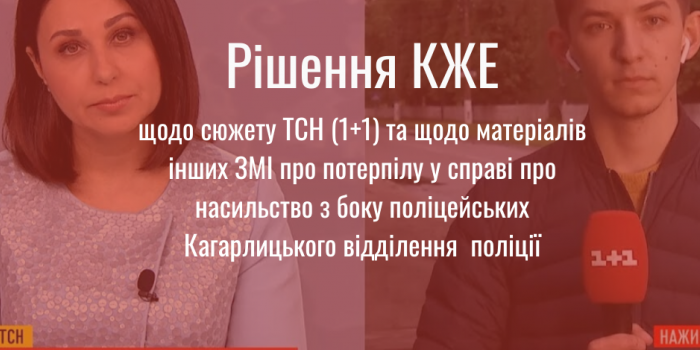 The Commission on Journalism Ethics (KJE) has publicly condemned the 1 + 1 broadcaster for the story "High profile case", which disclosed personal data of a woman who had been raped by police officers in Kagarlyk, without consent.

The Commisson on Journslism Ethics issued such a decision on 1 June about the story of TSN (1 + 1 TVchannel) and stories that other media outlets came out with speaking about the victim of violence by police officers of the Kagarlyk police department.

CJE noted that this TSN story violated the Article 3 ("The journalist should respect a person's privacy") and the Article 18 ("The journalist should be especially careful when covering issues related to children") of the Code of Ethics for Ukrainian Journalists. "These articles of the code were violated by some other media outlets, which disseminated the TSN report or came out with  their own stories, which disclosed the victim's personal data," the decision read.

According to KZhE, a large number of media outlets disseminated information about the victim with reference to the TSN story, in particular TSN.ua, Obozrevatel, Apostrophe, Vysokyi Zamok, RBC, Gazeta.ua, Vgolos, Channel 24 website , "KP in Ukraine".

The Commission on Journalistic Ethics condemned the facts of gathering information about the victim from acquaintances and fellow villagers, considered them unacceptable andsuch that  could inflict additional trauma to the victim. Any description (even negative one) of the victim cannot be an excuse for violence used by the police, the decision said.

Instead, the commission emphasized that the fact of violence used by the police was of a public interest. The Commission agreed with the statement of the UN Human Rights Monitoring Mission on necessity to "take a swift and effective action to change the culture of the police, which apparently still considers ill-treatment acceptable".

"In this regard, the commission called on the Ukrainian mass media to shift the focus of attention from the victim to the fact of police violence, to pay due attention to the coverage of such unacceptable facts by the law enforcement system, their investigation and police reform. These are the issues of major public interest, not the details about the identity of the victim ", - it is said in the CJE’s decision.

The CJE also pointed out that disseminating too many details of a crime (whoever voiced it, even the victim's lawyer), is unjustified and unethical, as such details can cause additional trauma to the victim and her family.

“Thus, we draw attention of journalistic community to the fact that the issue of lawyer's ethics and lawyer's responsibility is regulated by the Law of Ukraine "On Advocacy". Such a fact that the lawyer reaveals some information that causes prejudice to his client does not mean that the journalists and mass media won’t be held accountable inseparatedly for divulgation of such information”, the decision reads.

The commission asked the management of the news service "1 + 1", TSN, to produce its explanation, but as for now has not yet received any response.

In addition, the CJE provided recommendations for the media to follow when covering crimes against women and children, especially on the basis of sexual violence:

-To monitor the balance between the public interest and the privacy of victims of violence.

-To ensure that the published materials do not allow to indirectly identify the person who survived the violence with the help of a set of published data. Remember that even disparate data published by different media, taken in a whole, can be employed to identindicate the person.

-To respect the dignity of victims and their families.

-To use the correct terminology, in particular not to use the words "victim", but "woman / man who has experienced violence", "victims", "aggrieved persons”.

-To avoid any excessive detail of the crime.

-To avoid permissiveness, inciting, compassion, or even promotion of criminal behavior.

The commission also recommended that journalists used the already developed recommendations by mass media and human rights NGOs, both Ukrainian and foreign ones, when covering the topic of crimes and violence.

As IMI reported, some media outlets published a picture and the name of the girl, who, as it is currently suspected, had been raped and beaten by two police officers of the Kagarlyk police department. According to the girl's lawyer, he did not give permission for the publication of the victim's personal data in the media.