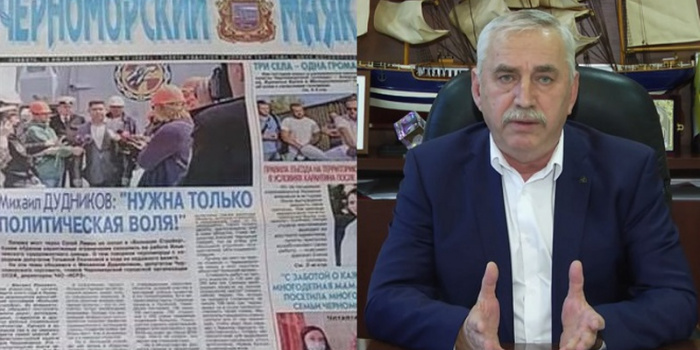 The editor-in-chief of the privatized newspaper “Chornomorsky Mayak”, Bohdan Panas, said he was under pressure from the city council and mayor Vasyl Gulyaev, as Izbirkom reported.

According to the journalist, immediately after the election of Vasyl Gulyaev as mayor, the editorial office was asked by the city council to publish some flattering papers about the mayor's activities and on the front page of the newspaper, but the journalists refused doing it.

After that, according to Bohdan Panas, he was summoned to the mayor and an inspection came soon to the editorial office, after which the city council informed the editorial office of its intention to terminate the lease agreement with the newspaper.

The editor-in-chief claimed that the city council did not provide an inspection report. According to Bohdan Panas, the mayor's actions violated the rights of the newspaper's staff, and the journalist was going to seize the court.

For his part, the mayor of Chernomorsk Vasyl Gulyaev claimed that the newspaper violated the terms of the agreement. According to him, during the reform of the newspaper, the editorial office received from the city council a room with a total area of ​​200 square meters for one hryvnia per year, under condition that the newspaper wuld come out and the editorial board would not rent or sublease the premises.

According to “Izbirkom”, the mayor posted a message citing the editor-in-chief who would explain that out of 15 journalists, only two worked for the newspaper. Meanwhile, the premises employed people who were not employees of the newspaper, but worked on the local site "04868".

"200 square meters. Two people. How can they work there and make a newspaper? I don't think it's possible. So isn't there anyone in the city to give these premises for one hryvnia? For example, according to the education department, we rent about 2 "thousands of square meters, and students are engaged in two shifts. So, maybe we should transfer these 200 square meters to tenants of school premises and cancel the second shift," - said the mayor.

However, the newspaper informed that Vasyl Gulyaev admitted that he really expressed his dissatisfaction with the editor-in-chief of the newspaper because he allegedly had refused to publish free greetings from an honorary 90-year-old citizen of the city. Then, according to the mayor, the editorial office still published this greeting for free.

In addition, the editor-in-chief of IT-3 TV channel Tymofiy Lvutin complained of pressure from the city council, saying that his accusations of allegedly producing custom-made materials appeared in Facebook comments. In this regard, he began to receive threats of physical violence. According to him, it started after the channel showed a satirical story about Vasyl Gulyaev, and he filed complaint to the police.

As Ali Safarov, a lawyer at the Institute of Mass Information said interviewed by “Izbirkom”, after the privatization of the media, the city authorities could not influence editorial policy and demand the publication of pieces, if such was stipulated by an agreement on local government coverage.

According to him, the city authorities can terminate the lease agreement only if it turns out that the editorial office provided sublease.

The lawyer reminded that the Law of Ukraine “On Reforming State and Municipal Print Media” explicitly stipulates the obligation of state authorities, other state bodies and local self-government bodies to withdraw from the founders (co-founders) of the print media and editorial office. Since the reform, public authorities and local governments have no right to manage the activities of the editorial office of the reformed publication, to give instructions on what should be published, in what format, on which page, and so on.

According to Ali Safarov, such actions on the part of local self-government bodies fall under the signs of censorship, in particular, provided for in part two of Article 24 of the Law of Ukraine “On Information”:

“2. Any interference in the professional activities of journalists is forbidden, as well as any control over the content of disseminated information, in particular for the purpose of disseminating or not disseminating certain information, concealment of socially necessary information, imposing a ban on coverage of certain topics, showing individuals or disseminating information about them, prohibitions to criticize , except in cases established by law, the agreement between the founder (owner) and the staff, the editorial charter.

The issue of renting the premises of the editorial office of the reformed publication is clearly defined in part two of Article 9 of the Law of Ukraine “On Reforming State and Municipal Print Media” and provides:

“2. Premises in state or communal ownership, in which the editorial offices were located at the time of the reform, are leased for a period of at least 15 years with the amount of rent established for budget organizations. The lease agreement is concluded between the editorial office and the State Property Fund of Ukraine (its regional branch) or the relevant local government body. Sublease of editorial premises is prohibited. ”

In addition, the lawyer of IMI noted that the pressure on the editorial office and journalists to force to disseminate or not to disseminate certain information, in particular with threats of early termination of the lease contrary to law, has signs of obstruction to legitimate professional activity of a journalist, which is a criminal offense. 171 of the Criminal code of Ukraine.

“It should also be added that the legislation of Ukraine provides for various mechanisms to protect the violated rights of journalists and the editorial staff should use them. Appeals to creative unions, the president or other bodies not authorized to consider this issue will not bring the desired effect, ”said IMI lawyer Ali Safarov.

As IMI reported, in 2020, experts from the Institute of Mass Information recorded 229 cases of violations of freedom of speech in Ukraine, 171 of which related to physical aggression against journalists.