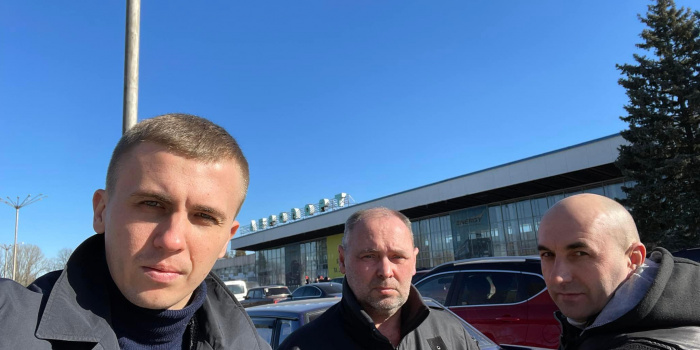 Mykhailo Tkach, a journalist with Ukrayinska Pravda, said that during the assault on his TV crew at the Dnipro airport, the operator was threatened by businessman Oleksander Petrovsky himslef. Tkach wrote about this on his Facebook page.

Tkach said that the TV crew was filming a story about the birthday of oligarch Igor Kolomoisky at the airport on February 13. The celebration was to take place in the “Menora” center, where there was a indoor parking.

"So, realizing that there will be a crowd of guests and almost all of them will come to the festivities in cars that had nothing to do with them, I decided that the only way to see who will take flight from the capital to Dnipro for the holiday, was to film at the airport. The decision turned out to be successful, and we really started filming the guests of numerous charters,” the journalist wrote.

He added that when the next charter plane from Kyiv was to land, UPvideographer Yaroslav Bondarenko came to the terminal again. Two security guards snatched the documents when Yaroslav introduced himself. One of the guards took cameraman’s phone. Then, in fact, two passengers left the terminal. The first is still being identified by journalists. It was him who took out a knife and, seizing Yaroslav, began to threaten that he would kill him, putting a knife to his face.

"It is important to understand that the security guards had the only goal which was to delete the video. There was no question of any security or danger. So they kept the operator. The operator's phone is password-protected, so they required Yaroslav to say the password. After Yaroslav was told several times that he would be killed, he revealed the password. The security guard deleted not just videos and photos for that day, but videos and photos for six months. He even deleted it from the "deleted" folder, - said Mykhailo Tkach.

According to him, the assailants had Yaroslav's documents all that time. The last to leave the terminal was Oleksander Petrovsky, nicknamed Narik (junkhead –n/tr).

Petrovsky did not help Yaroslav to get free, but, on the contrary, he began to threaten that he would now be taken to the "police station". He said the documents could be forged, and so it was necessary to verify everything. When Yaroslav once again said that he was performing an editorial task and did not even know who was in front of him now, Petrovsky said, "It is better not to know for you." Then Petrovsky and another guy with a knife got into a Lexus SUV and went to celebrate Igor Kolomoisky's birthday, ” as Tkach wrote.

In addition, the journalist noted that all the incident happened in front of the airport police.

Now, journalists are trying to get the video from the cameras of the VIP terminal to make it public: “We will be grateful to the sources for their help. In the near future, we will undergo all the procedures necessarily for the investigation. "

As IMI reported, on February 13 in In Dnipro, on February 13, some unknown people aggressed the TV crew of Mykhailo Tkach, the head of the Ukrainian Pravda journalistic investigation department, the Ukrayinska Pravda reported.