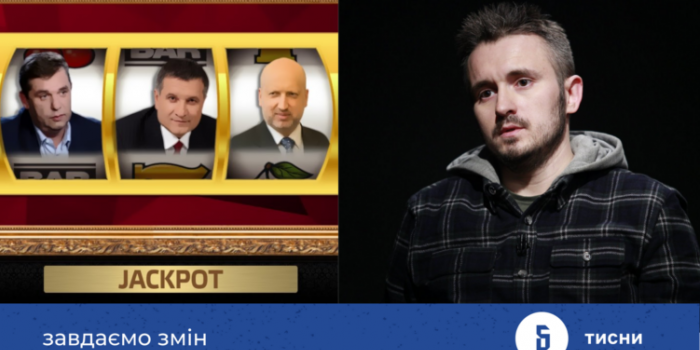 The Bihus.Info team won a case in the Supreme Court at the suit of former National Security and Defense Council Secretary Oleksandуr Turchynov over a story about the lottery monopoly "Gambling Business Undercover", which was made public in 2017, as Bihus.Info reported.

On April 7, the Supreme Court of Ukraine upheld the journalists' complaint and decided to dismiss Turchynov's claims and overturned the decisions of the first and appellate instances.

It will be recalled that former National Security and Defense Council Secretary Oleksander Turchynov filed a lawsuit over Nadiya Bourdei's report "Gambling business under cover." The story said that in 2015-2016, Ukraine lost more than 10 billion hryvnias in taxes from gambling. In particular, journalists found out that in 2015, the Ukrainian National Lottery (UNL) company, whose co-owner was linked to the then Secretary of the National Security and Defense Council Oleksandr Turchynov, gained a monopoly position in the lottery market.

A few months after the story aired, Oleksander Turchynov appealed to the court to declare the information about his relationship with UNL unreliable. In the first instance, the court upheld the claim, in the appellate instance they agreed with the decision of the first instance.

The journalists then filed a cassation appeal, and finally, the Supreme Court overturned the decisions of the previous instances and rejected Turchynov's lawsuit.

One of the key arguments of the Supreme Court was the public dimension of Turchynov, who at the time of the story was the secretary of the National Security and Defense Council, and thus, he was a public figure. According to the court ruling, since the politicians and officials who hold public office or exercise public power at the local, regional, national or international levels have decided to appeal to public trust and have agreed to "put themselves" up for public political discussion, they are subject to close public scrutiny and could potentially be sharply and severely criticized in the media for how they have performed or are performing their functions. At the same time, these figures and individuals should not have greater protection of their reputation and other rights compared to other persons. In this regard, the limit of permissible criticism of a politician or other public figure or public authority is much wider than that of an individual. These individuals inevitably open up to meticulous coverage of their words and actions and must be aware of this. ”

According to Bihus.Info lawyer Yevhen Vorobyov, the court also emphasized that the journalists expressed their own opinions about the events they were investigating during their investigation, and for making evaluative judgments within the meaning of Art. 30 of the Law on Information, journalists cannot be prosecuted.

"In resolving the dispute, the courts of previous instances erroneously considered that the information disseminated by the defendant was presented in the form of presenting true facts, in connection with which they reached an unfounded conclusion that there were legal grounds to satisfy the claim," the court said.

As IMI reported, on September 11, 2019, the Supreme Court of Ukraine dismissed the lawsuit of former Secretary of the National Security and Defense Council Oleksandr Turchynov against Bihus.Info journalists regarding the investigation over his involvement into currency exchange offices.