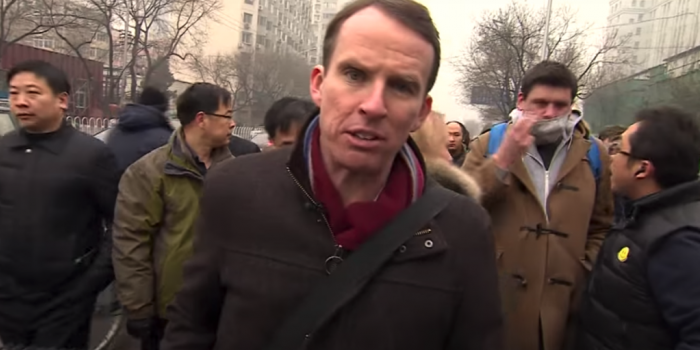 The BBC's Beijing correspondent John Sudworth has left China and moved to Taiwan following pressure and threats from the Chinese authorities, as BBC reported.

Sudworth, who has won awards for his reporting on the treatment of the Uyghur people in the Xinjiang region, left Beijing with his family.

The BBC says it is proud of his reporting and he remains its China correspondent.

China has denounced the BBC's coverage of Xinjiang.

Sudworth, who was based in China for nine years, said he moved to Taiwan after it became increasingly difficult to remain in China.

He and his family were followed to the airport and into the check-in area by plainclothes police officers. His wife, Yvonne Murray, reports on China for the Irish public broadcaster RTÉ.

Sudworth says he and his team faced surveillance, threats of legal action, obstruction and intimidation wherever they tried to film.

His reporting colleagues are still in Beijing, and he says he intends to continue his reporting from Taiwan.

A Chinese foreign ministry spokesperson said the authorities had not been given prior notice.

"Only in recent days when we were faced with the task of renewing Sudworth's press card did we learn that Sudworth left without saying goodbye. After he left the country, he didn't by any means inform the relevant departments nor provide any reason why," Hua Chunying told a news conference in Beijing.

In its statement, the BBC said: "John's reporting has exposed truths the Chinese authorities did not want the world to know."

The number of international media organisations reporting from China is shrinking. Last year China expelled correspondents for the New York Times, the Washington Post and the Wall Street Journal, among others.

And in September 2020, the last two reporters working in China for Australian media flew home after a five-day diplomatic standoff.

The Foreign Correspondents' Club (FCC) of China says foreign journalists are "being caught up in diplomatic rows out of their control".

BBC
Liked the article?
Help us be even more cool!
Other news