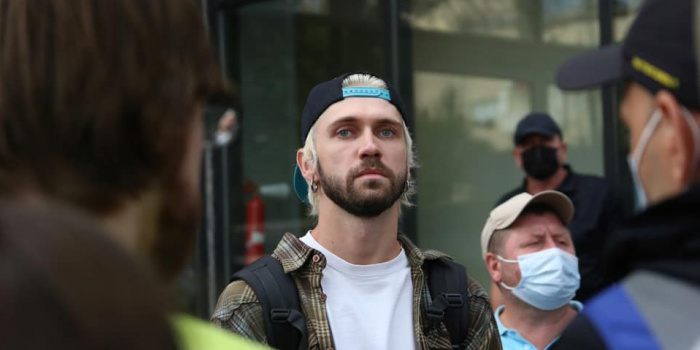 The Pechersk District Court of Kyiv sentenced assailant of correspondent for Bukvy Oleksandr Kuzhelny to one year of imprisonment and exonerated him from serving it with one-year on probation. Mikhail Shalankevych was charged with assault on correspondent for Bukvy online edition under the Sixth Administrative Court of Appeal in July this year. This decision Pechersk District Court in Kyiv issued on Sept. 13, as Bukvy reported.

The court found the accused, a citizen of the Russian Federation Mikhail Shalankevich, guilty of committing an act of hooliganism (Part 1 of Article 296 of the Criminal Code).

According to Bukvy, Mikhail Shalankevich (known as Hans) in 2018 was sentenced in the Russian Federation to six years in prison for robbery and hooliganism in the group of the late Russian neo-Nazi Maxim Marcinkiewicz (Hand Axe), but was released from the courtroom. He moved to Kyiv two years ago, where in the spring of 2021, together with another Russian citizen, Denis Dzhivovsky, he committed an assault on two young persons. The case of this attack is currently being considered by the Podilsky District Court of Kyiv.

“We note that the position of the prosecution was limited to the provisions of Part 1 of Article 296 of the Criminal Code of Ukraine and did not take into account that other protesters could have been involved in the attack on Oleksandr Kuzhelny. In addition, the charges did not cover the provisions of Articles 171 (“Obstruction of the lawful professional activity of journalists”), 345-1 (“Threat or violence against a journalist”), despite the fact that the investigation was provided with evidence that Oleksandr Kuzhelny was fulfilling an editorial task at the scene. ", - the editorial office noted.

As IMI reported, on July 21, some persons from right-wing organizations assaulted the journalist for Bukvy online edition Oleksander Kuzhelny. The incident occurred before the courthouse, where they considered the issue of deportation of Belarusian activist Aleksei Bolenkov. Right-wing extremists demanded from the Bukvy’s correspondent to leave the courthouse They shouted insults and aggressed the journalist. Alexander Kuzhelnyy at his Facebook page said that he was hit in the face, they spat in his face, pushed and threatened him.

“I am coming to the Sixth Administrative Court of Appeal, where the case of activist Oleksiy Bolenkov was to be considered. Nationalists of various organizations gathered under the building. I take out the camera to take some pictures. Almost immediately, I see a negative reaction to me and shouts "Don't let him take pictures, he is a mongrel, leftist!" and so on. One of the organizers, Oleksiy Svinarenko, runs up and starts interfering with my work, aggressively urging others to do the same. Under the barrage of insults and threats, one of the Nazis spits in my face. I am being pushed and pressed down, ”the journalist said.