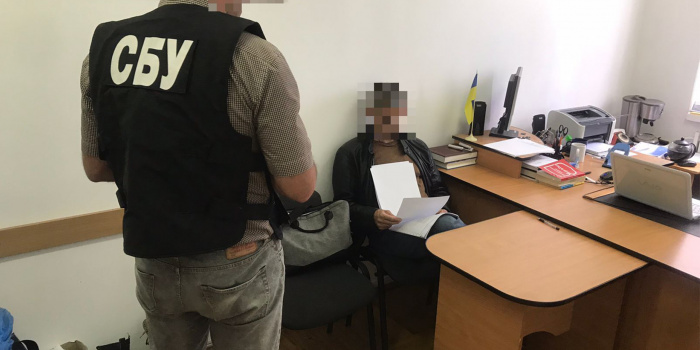 The Vinnytsia City Court of Vinnytsia region arrested a freelance correspondent of the anti-Ukrainian online media outlet PolitNavigator, who is suspected of treason and encroachment on the territorial integrity and inviolability of Ukraine.

According to the prosecution's information, since 2014, the suspect has been maintaining unofficial work relations with the head and owner of PolitNavigator. The media outlet systematically publishes anti-Ukrainian content on their website, which includes calls for actions to change the territory's span of the territory or the outline of the Ukrainian state border.

At an unspecified time, the head of "PolytNavigator" hired the suspect as a freelance correspondent and columnist without observing the procedure for employment of citizens.

After the beginning of the russian armed forces' full-scale invasion on the territory of Ukraine, between February 24 and March 10, the head of the media outlet tasked the suspect with preparing false materials aimed at destabilizing the socio-political situation in advance. After that, the content written by the suspect was posted on the website for public access under a pseudonym.

As a result of a full and comprehensive trial process, the court imposed a preventive measure on the suspect in the form of detention without determining the amount of bail. The investigation is currently ongoing.

The man is suspected of committing criminal offenses provided for in Part 2 of Article 110 (public calls to changing the territorial borders of Ukraine) and part 1 of Article 111 (treason) of the Criminal Code of Ukraine. These crimes are punishable by imprisonment for up to 15 years with or without confiscation of property.

As reported by the Prosecutor General's Office, the illegal activities of the mass media owner are being investigated in a separate criminal proceeding.

According to the PGO, the suspected correspondent was tasked with preparing false materials aimed at stirring up social and political sentiments and harming the territorial integrity, inviolability, and defense capability of Ukraine. After February 24, 2022, the emphasis of the publications shifted to distorting the real circumstances of the russian military aggression against Ukraine and justifying the crimes of russian troops. Over a dozen such publications have been discovered.

According to the SBU Office in Vinnytsia region, the pseudo-journalist was a 50-year-old Zhytomyr native, a so-called "political issues expert" who spread kremlin propaganda and discredited Ukraine on the international stage. "The 'expert' was receiving instructions from a russian superviser in the temporarily occupied Crimea, and the 'royalties' – through electronic payment systems that are banned in Ukraine," the SBU reported.