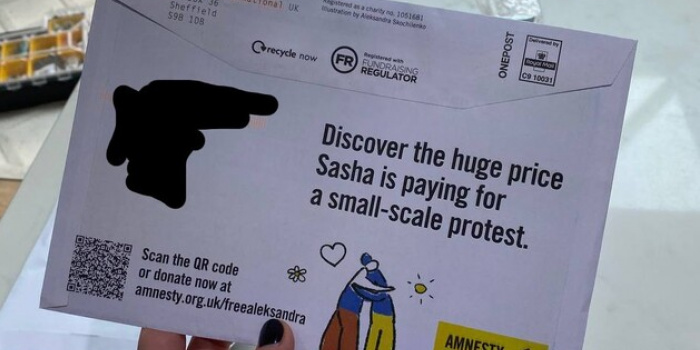 International human rights organization Amnesty International issued envelopes depicting two people hugging. One person is painted in the colors of the Ukrainian flag, the other – in the Russian colours, ZN.ua reports.

"They are back at it again. Amnesty International just can’t stop themselves from equating the aggressor and the victim. Just take your bags and leave. It’s time to resign, Agnes Callamard (head of the organization. – Ed.)," says news aggregator Visegrád 24.

The envelopes contain a call to financially support Russian political prisoners, who are supposed to help "put pressure on the Russian government." The sums range from 15 to 45 pounds (from UAH 637 to 1910. – Ed.). The organization is currently raising money for Alexandra Skochilenko, a St. Petersburg artist and journalist. Russian security forces detained her for anti-war rallying on April 11, 2022. She faces up to ten years in prison. She has health problems that have worsened in the pre-trial detention center. In June 2022, Amnesty International declared the artist a prisoner of conscience.

The executive director of the Institute of Mass Information, Oksana Romaniuk, suggests that this is probably a deliberate information campaign and not just ignorance.

"Amnesty believes that we should be embracing Russians while they are carrying out a genocide here... I think they are sitting on the Kremlin's money, because it is simply impossible to be so uninformed in the modern world. I don't think they are stupid, they are promoting it deliberately," Romaniuk said.

We remind that on August 4, human rights organization Amnesty International published a report stating that the Ukrainian military was endangering the civilian population by creating bases and placing weapons in residential areas, namely in schools and hospitals, while resisting the russian invasion.

Deputy Minister of Defense Hanna Malyar stated that this AI study did not take the fact of the russian aggression, the timeline of events, and the context of Ukraine defending its statehood into account, and also distorted the real picture of the international crime of aggression that russia has been committing since 2014.